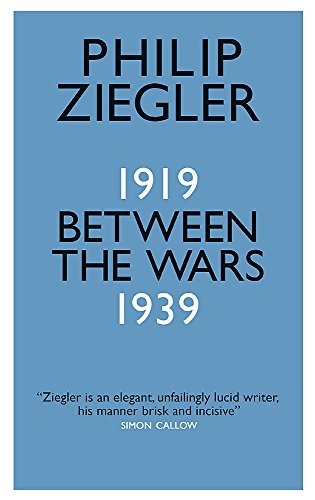 Between the Wars
by Philip Ziegler

In Stock
£8.49
Renowned biographer and historian Philip Ziegler tackles the great cultural and social events, flashpoints and diplomatic wrangles that led the world from the First to the Second World War
Very Good
Only 2 left

Between the Wars Summary

At the end of 1918 one prescient American historian began to write a history of the Great War. "What will you call it?" he was asked. "The First World War," was his bleak response.

In Between the Wars Philip Ziegler examines the major international turning points - cultural and social as well as political and military - that led the world from one war to another. His approach is panoramic, touching on all parts of the world where history was being made, examining Gandhi's March to the Sea and the Chaco War in South America alongside Hitler's rise to power.

It is the tragic story of a world determined that the horrors of the First World War would never be repeated, yet committed to a path which in hindsight was inevitably destined to end in a second, even more devastating conflict.

Each chapter bears the unmistakable stamp of Ziegler's scholarship: a keen eye for the telling anecdote, elegant and fluid prose, and calm and fair judgments. In a world that grows ever more uncertain, its perspective on how hopes of peace can dissolve into the promise of war becomes more relevant with each passing day.

Between the Wars Reviews

A fascinating, panoramic overview . . . In prose of crystalline elegance, Ziegler travels chronologically across countries and continents, discussing global events that range from the complex arguments for Home Rule in Ireland in 1921 to the fascist takeover of Madrid in 1939. -- Juliet Nicolson * Spectator. *
Very rewarding, well-written, succinct and full of intelligent judgements. -- Hugh Thomas
Ziegler is an elegant, unfailingly lucid writer -- Simon Callow.
One of the most experienced and versatile biographers of his generation. * Observer. *
Ziegler writes with urbanity and wit but is unflinching in his judgments. * Times Literary Supplement. *
Fascinating. -- Bill Bryson * on The Black Death. *
A skillful historian. * Kirkus Reviews. *

Philip Ziegler was a diplomat before becoming an editorial director at the publishers William Collins. His many books include acclaimed biographies of Laurence Olivier, William IV, Lady Diana Cooper, Lord Mountbatten and Harold Wilson, as well as the classic history of the Black Death.

GOR008268755
Between the Wars: 1919-1939 by Philip Ziegler
Philip Ziegler
Used - Very Good
Hardback
Quercus Publishing
2016-10-06
304
0857055216
9780857055217
N/A
Book picture is for illustrative purposes only, actual binding, cover or edition may vary.
This is a used book - there is no escaping the fact it has been read by someone else and it will show signs of wear and previous use. Overall we expect it to be in very good condition, but if you are not entirely satisfied please get in touch with us.