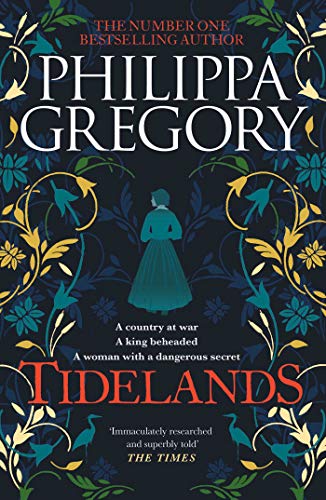 Out of Stock
N/A
Very Good
Only 0 left

'Gregory is an experienced storyteller and doesn't let you down. Tidelands is a gripping and intelligent portrait of a woman fighting to survive in a hostile world' THE TIMES

Midsummer's Eve, 1648, and England is in the grip of civil war between renegade King and rebellious Parliament. The struggle reaches every corner of the kingdom, even to the remote Tidelands - the marshy landscape of the south coast.

Alinor, a descendant of wise women, crushed by poverty and superstition, waits in the graveyard under the full moon for a ghost who will declare her free from her abusive husband. Instead she meets James, a young man on the run, and shows him the secret ways across the treacherous marsh, not knowing that she is leading disaster into the heart of her life.

Suspected of possessing dark secrets in superstitious times, Alinor's ambition and determination mark her out from her neighbours. This is the time of witch-mania, and Alinor, a woman without a husband, skilled with herbs, suddenly enriched, arouses envy in her rivals and fear among the villagers, who are ready to take lethal action into their own hands.

'The first in a planned series . . . The author crafts her material with effortless ease. Her grasp of social mores is brilliant, the love story rings true and the research is, as ever, of the highest calibre' Elizabeth Buchan, Daily Mail

'Vivid and beguiling - Philippa Gregory at her best' woman&home

'Philippa Gregory returns with an English Civil War novel that excels in everything she does best. Historical events are written with breathless immediacy, keeping the reader enthralled even if they know the outcome. She pays close attention to the plight of women in the past, so often unchanged despite men's wars, and gives them a voice . . . Fans will not be disappointed' Alys Key, The i

'Shines a light on the struggles of 17th century women . . . If this novel is the first sign of what's to come then readers are in for a treat' Emma Lee-Potter, Daily Express

'Tidelands evokes a world of suspense and superstition. Its fascinating fictional heroine, Alinor, is caught in a net of in-between spaces . . . I was completely swept up in this wonderful, immersive story set in the English Civil War when women who lived unconventional lives risked being accused of witchcraft' Tina Jackson, Writing Magazine

Philippa Gregory is the author of many bestselling novels, including The Other Boleyn Girl, and is a recognised authority on women's history. Her Cousins' War novels, reaching their dramatic conclusion with The King's Curse, were the basis for the highly successful BBC series, The White Queen. Philippa's other great interest is the charity that she founded over twenty years ago: Gardens for the Gambia. She has raised funds and paid for over 200 wells in the primary schools of this poor African country. Philippa graduated from the University of Sussex and holds a PhD and Alumna of the Year 2009 at Edinburgh University. In 2016, she received the Harrogate Festival Award for Outstanding Contribution to Historical Fiction. Philippa lives with her family on a small farm in Yorkshire and welcomes visitors to her website, PhilippaGregory.com.

GOR010414228
Tidelands: THE RICHARD & JUDY BESTSELLER by Philippa Gregory
Philippa Gregory
Used - Very Good
Paperback
Simon & Schuster Ltd
2020-02-20
464
1471172759
9781471172755
N/A
Book picture is for illustrative purposes only, actual binding, cover or edition may vary.
This is a used book - there is no escaping the fact it has been read by someone else and it will show signs of wear and previous use. Overall we expect it to be in very good condition, but if you are not entirely satisfied please get in touch with us.