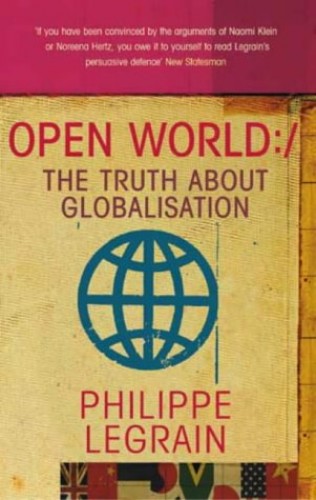 In Stock
£4.49
A passionate and lucid antidote to NO LOGO and THE SILENT TAKEOVER
Very Good Good
Only 1 left

Open World: The Truth about Globalisation by Philippe Legrain

Globalisation is one of the most controversial issues in the world today. While protestors take to the streets at international summits, it is becoming conventional wisdom that companies are taking over the world, that governments' ability to tax, spend and regulate is under threat from global competition, that globalisation harms the poor and that democracy is at risk.

Not so. This tightly argued and fiercely intelligent book demolishes some of these myths and shows how, without globalisation, the poor are never going to get richer. It is simply the only way to give governments the means to combat poverty: money for schools, hospitals and welfare. Focusing on the history of world trade as well as topical issues such as the power of corporations, whether globalisation is bad for poor countries, whether it threatens the environment and Americanises indigenous cultures, Philippe Legrain shows why elected governments are still very much in control and why a more open world offers greater opportunity for everyone, rich and poor, to better their lives.

The world did need another book about globalisation; OPEN WORLD is it * ECONOMIST *
At last a good book on globalisation . . . lucid and persuasive * FINANCIAL TIMES *
[Legrain] engages with the big issues much more convincingly than Klein * SUNDAY TIMES *
If you have been convinced by Naomi Klein or Noreena Hertz, you owe it to yourself to hear Legrain's persuasive defence * NEW STATESMAN *

He studied econonmics & international politics at LSE and until recently he was special adviser to the D.G. of the WTO. He has also been trade & economics correspondent for THE ECONOMIST & written for the FT, Guardian, New Statesman, Prospect, Foreign Policy & Ecologist

GOR001178868
Open World: The Truth about Globalisation by Philippe Legrain
Philippe Legrain
Used - Very Good
Paperback
Little, Brown Book Group
2003-08-07
384
034911529X
9780349115290
N/A
Book picture is for illustrative purposes only, actual binding, cover or edition may vary.
This is a used book - there is no escaping the fact it has been read by someone else and it will show signs of wear and previous use. Overall we expect it to be in very good condition, but if you are not entirely satisfied please get in touch with us.