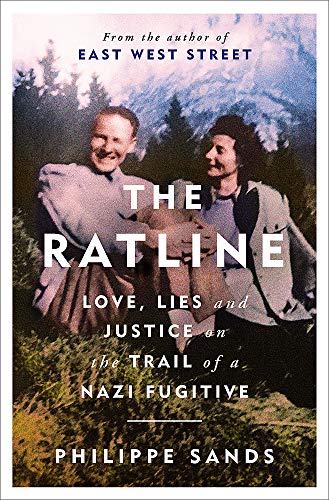 The Ratline
by Philippe Sands, QC

In Stock
£19.99
The new book by the winner of the Baillie Gifford Prize and author of the Sunday Times bestseller EAST WEST STREET - a historical detective story that sets out to uncover the truth behind what happened to leading Nazi Otto von Wachter
New£19.99
5 in stock

The Ratline: Love, Lies and Justice on the Trail of a Nazi Fugitive by Philippe Sands, QC

FROM THE AUTHOR OF EAST WEST STREET

As Governor of Galicia, SS Brigadefuhrer Otto Freiherr von Wachter presided over an authority on whose territory hundreds of thousands of Jews and Poles were killed, including the family of the author's grandfather. By the time the war ended in May 1945, he was indicted for 'mass murder'. Hunted by the Soviets, the Americans, the Poles and the British, as well as groups of Jews, Wachter went on the run. He spent three years hiding in the Austrian Alps, assisted by his wife Charlotte, before making his way to Rome where he was helped by a Vatican bishop. He remained there for three months. While preparing to travel to Argentina on the 'ratline' he died unexpectedly, in July 1949, a few days after spending a weekend with an 'old comrade'.

In The Ratline Philippe Sands offers a unique account of the daily life of a senior Nazi and fugitive, and of his wife. Drawing on a remarkable archive of family letters and diaries, he unveils a fascinating insight into life before and during the war, on the run, in Rome, and into the Cold War. Eventually the door is unlocked to a mystery that haunts Wachter's youngest son, who continues to believe his father was a good man - what happened to Otto Wachter, and how did he die?

'A gripping adventure, an astounding journey of discovery and a terrifying and timely portrait of evil in all its complexity, banality, self-justification and madness. A stunning achievement' STEPHEN FRY

'Breathtaking, gripping, and ultimately, shattering. Philippe Sands has done the unimaginable: look a butcher in the eye and tell his story without flinching' ELIF SHAFAK

'A triumph of research and brilliant storytelling' ANTONY BEEVOR

A gripping adventure, an astounding journey of discovery and a terrifying and timely portrait of evil in all its complexity, banality, self-justification and madness. A stunning achievement -- STEPHEN FRY
Hypnotic, shocking and unputdownable -- JOHN LE CARRE
Breathtaking, gripping, and ultimately, shattering. Philippe Sands has done the unimaginable: look a butcher in the eye and tell his story without flinching -- ELIF SHAFAK
A triumph of research and brilliant storytelling -- ANTONY BEEVOR
Remarkable . . . Sands's untangling of the mysteries surrounding Otto von Wachter is masterfully done * THE SUNDAY TIMES *
This is a burningly necessary book. Sands makes a gently unsparing dissection of deception, love, delusion and ineradicable evil. Elegant, painstaking, passionate and quietly enraging -- A L KENNEDY
This is a taut and finely crafted factual thriller, reminiscent in density and pace of John le Carre . . . a feat of exhilarating storytelling - gripping, gratifying and morally robust * OBSERVER *
The forensic stamina and precision that garnered such praise for Sands' 2016 work EAST WEST STREET are equally in evidence here. THE RATLINE is not only about events in the past, but their dangerous legacy in the world today. A formidable piece of historical sleuthing written with all the pace and suspense of a thriller, it is a timely reminder that crimes against humanity don't occur only at the level of states and governments. They take place also in the more secret and less fathomable depths of people's hearts and minds -- Rebecca Abrams * FINANCIAL TIMES *
Extraordinary. In fast-paced, John le Carre-like pages (spies, Nazi-hunters, dark Vatican forces) . . . THE RATLINE is an electrifying true crime for the contagion lockdown * EVENING STANDARD *
Sands is a terrier at research . . . The seething world of post-war Rome, with its senior fascists reprieved and returning to prominence, its war criminals lurking in hiding, its spies and secret services brokering deals and its adventurers and profiteers making fortunes, has seldom been more vividly described -- Caroline Moorehead * SPECTATOR *
A book of twists and intrigues as complex as any le Carre thriller . . . like its predecessor, [it] is replete with vivid descriptions and Sands brings to it the same relentless narrative momentum * LITERARY REVIEW *
Fascinating . . . Switching between the distant and very recent past, the book is episodic in nature, but this only makes it more compelling. It combines a mystery with a straight retelling of history - shining a light into one of the less investigated corners of the Nazi era and its aftermath - and a thoughtful inquiry into how we reckon with it -- David Bennum * MAIL ON SUNDAY *
THE RATLINE is a compelling piece of forensic historical research - one that is every bit as good as EAST WEST STREET * THE TELEGRAPH *
A truly extraordinary book - a forensic yet deeply humane and measured exploration of the human capacity for self-deception and cruelty -- HENRY MARSH
Has the illuminating brilliance of a magnesium flame and a pace worthy of John le Carre . . . THE RATLINE is a cunningly constructed courtroom drama in book form . . . It is detailed, it is damning - all the more so because of the author's dispassionate decency * SUNDAY EXPRESS, S MAGAZINE *
Vivid and complex . . . Sands has skilfully avoided the catalogue of inhumanity often detailed in books about the Nazis, preferring a low-key, gently poignant approach that makes the occasional intrusion of moments of horror all the more shocking * DAILY EXPRESS *
Brilliant . . . extraordinarily moving * DAILY MIRROR *
A gripping tale, crammed with twists and turns . . . enthralling * HISTORY TODAY *
THE RATLINE is tragic and unforgettable . . . Sands has the artfulness of a born storyteller, as well as deadly forensic skills and formidable patience at reaching his ends. He unwraps his evidence in spare, clear, convincing prose with a taut control that keeps one on tenterhooks . . . Sands's intellectual passion, his crusading zeal and his compassion for the dead and wounded make this a great book * THE OLDIE *
It is this present-day drama, rather than the historical story, that makes this book so extraordinary. Readers will, much like the author, find themselves longing for Horst to open his eyes. That he finds this so difficult to do is simultaneously poignant and grotesque * BBC HISTORY MAGAZINE *
Diaries, encrypted letters and secret documents are dissected by a mastermind . . . a great achievement -- CEES NOOTEBOOM
In a story that is as gripping as any thriller, Philippe Sands uncovers new evidence about exactly what happened to von Wachter leading up to his unexpected death in 1949 * JEWISH RENAISSANCE *
A riveting expose . . . a gripping blend of historical scholarship and clever detective work * STRONG WORDS *
Engrossing . . . Part history, part memoir and part detective story, it's a thought-provoking read * CHOICE MAGAZINE, Book of the Month *
An astonishing amount of research and expertise has gone into the making of this book . . . a compelling historical and human drama * THE TABLET *

Philippe Sands is Professor of Law at University College London and a practising barrister at Matrix Chambers. He frequently appears before international courts, and has been involved in many of the most important cases of recent years, including Pinochet, Yugoslavia, Rwanda, Iraq, Guantanamo, Chagos and the Rohingya in Myanmar. He is the author of LAWLESS WORLD, TORTURE TEAM and the Sunday Times bestselling EAST WEST STREET, which also won the Baillie Gifford Prize and was named Non-fiction Book of the Year at the British Book Awards.

NGR9781474608121
The Ratline: Love, Lies and Justice on the Trail of a Nazi Fugitive by Philippe Sands, QC
Philippe Sands, QC
New
Hardback
Orion Publishing Co
2020-04-16
432
1474608124
9781474608121
N/A
Book picture is for illustrative purposes only, actual binding, cover or edition may vary.
This is a used book - there is no escaping the fact it has been read by someone else and it will show signs of wear and previous use. Overall we expect it to be in very good condition, but if you are not entirely satisfied please get in touch with us.