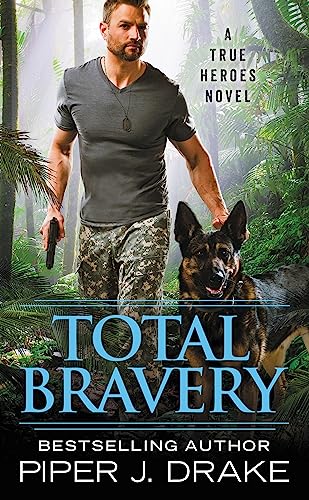 Hot military heroes, the women who love them, and the dogs who always have their backs. TRUE HEROES #4 is a continuation in the high-adrenaline romantic suspense True Heroes series from Piper J. Drake.

Raul Sa, the newest recruit at a private military contract organization Search and Protect, is looking to leave his nightmares behind him. He and his new canine partner, Taz, have bonded well and his best friend is part of his new team, but relations with the other members of the squadron are best described as in progress.

When Ami Siri realizes dangerous people are after her, her first call is to her older sister. But it's Raul who picks up the phone. She has no idea who he is-- or that he's her older sister's best friend-- but she's got no time to wait for someone else. She's in Hawaii conducting sensitive research with no way to get back home, and she's just escaped an attempted kidnapping. Raul sounds capable-- and sexy-- and she desperately needs his help.

Raul doesn't think twice before deploying ahead of the Search and Protect team to help Ami. Inexorably drawn to her, he'll have to find a solution to the people threatening Ami's freedom...and he'll need to survive his best friend's temper when she finds out he's fallen in love with her younger sister.

Piper J. Drake (or PJ) spent her childhood pretending to study for the SATs by reading every interesting novel she could find at the library. After being introduced to the wonderful world of romance by her best friend, she dove into the genre. PJ began her writing career as PJ Schnyder, writing sci-fi & paranormal romance and steampunk, for which she won the FF&P PRISM award as well as the NJRW Golden Leaf award and Parsec award. PJ's romantic suspense novels incorporate her interests in mixed martial arts and the military. The True Heroes series is inspired by her experience rescuing, owning and training a variety of retired working dogs, including Kaiser, a former guard dog, and Mozart, who was trained to detect explosives.
GOR011529977
9781538759530
1538759535
Total Bravery by Piper J. Drake
Piper J. Drake
True Heroes
Used - Good
Paperback
Little, Brown & Company
20180517
336
N/A
Book picture is for illustrative purposes only, actual binding, cover or edition may vary.
This is a used book - there is no escaping the fact it has been read by someone else and it will show signs of wear and previous use. Overall we expect it to be in very good condition, but if you are not entirely satisfied please get in touch with us
Trustpilot