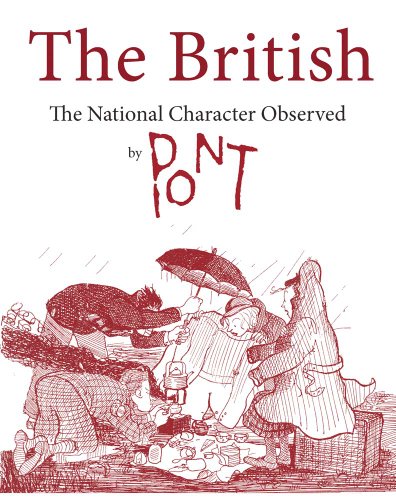 The British
by Pont

In Stock
£12.99
A collection showing our national foibles, by the celebrated and much-loved cartoonist.
Very Good
Only 2 left

The British by Pont

Classic illustrations of our national character and foibles by the celebrated and much-loved cartoonist. A fondness for laughing at our own anecdotes. An assertion of the importance of tea. A weakness for oak beams. A keen interest in the weather. A tendency to 'become doggy'. The British haven't changed much since the 1930s, when Pont's first witty and hilarious observations on the national character appeared in 'Punch' magazine. Pont's plump rolling-pin wielding cooks and solar-topee'd imperialists capture a distinct moment in British inter-war history, but his observations of character are timeless. In the nursery, at the opera, or in the bath, in tweed or tennis whites or bowler hat, Pont conjures distinct, complete personalities with a few strokes of his pen. Charming, idiosyncratic and - above all - wonderfully funny, this unforgettable collection will bring Pont's extraordinary talent to a new generation of fans.

I have recently been enjoying a new edition of cartoons by the wonderful Thirties cartoonist Pont. Called The British: The National Character Observed, the book includes Pont's most famous sequence, The British Character, in which, with beautiful wit, he illustrated national characteristics prevalent at the time ... Some of Pont's cartoons seem amazingly prescient, almost as though they had been drawn only yesterday -- Craig Brown, Columnist of the Year, Daily Mail
Pont's penmanship is an appealing mixture of rough, scribbly shading, block black shadows, and exquisitely fine detail in the right places * Guardian *
Like the best moderns he infuses character into every curve of a rump or tilt of an eyebrow, adding tiny jokes in every corner * Libby Purves *

'Pont' (Graham Laidler) was born in 1908, trained as an architect, but by his mid-twenties had become one of Punch's most prolific and successful cartoonists.

GOR004780915
The British by Pont
Pont
Used - Very Good
Hardback
Prelude
2010-11-04
192
0715639803
9780715639801
N/A
Book picture is for illustrative purposes only, actual binding, cover or edition may vary.
This is a used book - there is no escaping the fact it has been read by someone else and it will show signs of wear and previous use. Overall we expect it to be in very good condition, but if you are not entirely satisfied please get in touch with us.