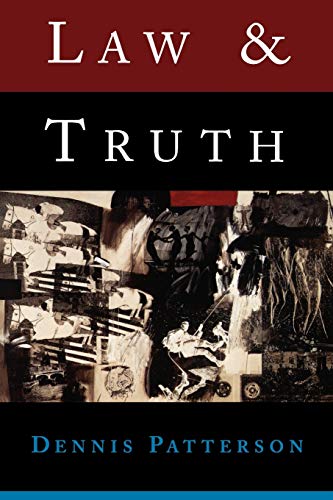 In Stock
£17.99
Taking the question "What does it mean to say a proposition of law is true?", this book draws on the later philosophy of Wittgenstein, as well as the postmodern theory of the relationship between language, meaning and the world. It examines contemporary jurisprudential approaches to this question.
Well Read
Only 1 left

Taking up a single question-"What does it mean to say a proposition of law is true?"-this book advances a major new account of truth in law. Drawing upon the later philosophy of Wittgenstein, as well as more recent postmodern theory of the relationship between language, meaning, and the world, Patterson examines leading contemporary jurisprudential approaches to this question and finds them flawed in similar and previously unnoticed ways. He offers a powerful alternative account of legal justification, one in which linguistic practice-the use of forms of legal argument-holds the key to legal meaning.

an interesting and enlightening consideration of the question of what it means to say that a proposition of law is true. * Georgia Warnke, Mind Vol.109, No.435 July 2000. *
The great virtues of Patterson's book lie in the clear and intelligent way it sorts through legal theories, distinguishes modes of legal argument, and connects philosophical theories of truth to questions of law. * Georgia Warnke, Mind Vol.109, No.435 July 2000. *
"Law & Truth is one of the most significant books on jurisprudence to be published in recent years."-Notre Dame Law Review
"Patterson's project succeeds."-Columbia Law Review
"An invaluable addition to the literature on philosophical realism, language philosophy, and legal philosophy."-Choice
"An excellent compendium of contemporary views on the epistemological soundness of contemporary theory of jurisprudence....[Includes] two superlative [chapters] on the jurisprudential notions of Ronald Dworkin and Stanley Fish. This thorough ventilation of the claims and pretentions of these two eminent jurists brings readers... to the forefront of controversy in the philosophy of law and related philosophical disciplines.... The concluding chapters...offer Patterson's own claim that truth is best seen as a linguistic practice among competently trained communicators.... An invaluable addition to the literature on philosophical realism, language philosophy and legal philosophy."-Choice
"Patterson's book is an important piece of work on a topic fundamental to legal theory and currently of great interest in scholarly circles. Professor Patterson addresses large and difficult issues of metaphysics, epistemology, and the philosophy of language, which many believe to lie at the foundations of law and legal reasoning."-Gerald J. Postema, University of North Carolina at Chapel Hill
"Patterson writes with astonishing breadth and clarity about every issue facing anyone thinking seriously about contemporary law and the possibility of making 'true' statements about what law requires."-Sanford Levinson, University of Texas at Austin School of Law
"This book constitutes one of the best overviews of the important recent debate over legal justification, providing a fascinating survey of discussion of meaning and truth as it lays the groundwork for Patterson's original and provocative answer to the question, 'What does it mean to say that a proposition of law is true?' Through its deep acquaintance with both Wittgenstein and postmodern theory, it is a book sure to stimulate and raise the level of debate among legal and political philosophers."-James Tully, McGill University
"Patterson's title literally captures the agenda of this lucid and tightly reasoned book; philosophical theories of truth can inform and enrich jurisprudential theories of law."-William Eskridge, "Georgetown University Law Center
"Law and Truth is a valuable contribuiton to legal theory."-Michigan Law Review
"...incisive and succinct postmodern critique of contemporary legal theory..."-Ethics
"Law and Truth, Patterson's most ambitious work to date, is both an intellectual tour de force and a good, old-fashioned street brawl."-Yale Law Journal

GOR009968901
Law and Truth by Professor Dennis Patterson
Professor Dennis Patterson
Used - Well Read
Paperback
Oxford University Press Inc
1999-12-01
198
0195132475
9780195132472
N/A
Book picture is for illustrative purposes only, actual binding, cover or edition may vary.
This is a used book. We do our best to provide good quality books for you to read, but there is no escaping the fact that it has been owned and read by someone else previously. Therefore it will show signs of wear and may be an ex library book.