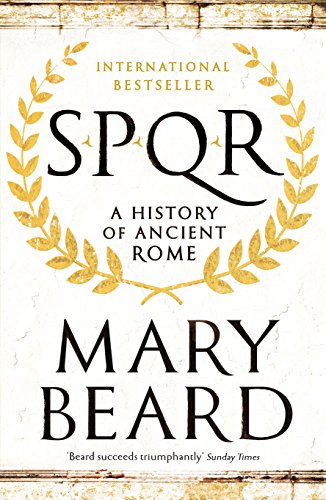 SPQR: A History of Ancient Rome by Professor Mary Beard

Sunday Times Top 10 Bestseller Shortlisted for a British Book Industry Book of the Year Award 2016 The new series Ultimate Rome: Empire Without Limit is on BBC2 now Ancient Rome matters. Its history of empire, conquest, cruelty and excess is something against which we still judge ourselves. Its myths and stories - from Romulus and Remus to the Rape of Lucretia - still strike a chord with us. And its debates about citizenship, security and the rights of the individual still influence our own debates on civil liberty today. SPQR is a new look at Roman history from one of the world's foremost classicists. It explores not only how Rome grew from an insignificant village in central Italy to a power that controlled territory from Spain to Syria, but also how the Romans thought about themselves and their achievements, and why they are still important to us. Covering 1,000 years of history, and casting fresh light on the basics of Roman culture from slavery to running water, as well as exploring democracy, migration, religious controversy, social mobility and exploitation in the larger context of the empire, this is a definitive history of ancient Rome. SPQR is the Romans' own abbreviation for their state: Senatus Populusque Romanus, 'the Senate and People of Rome'.

Fast-moving, exciting, psychologically acute, warmly sceptical -- Bryan Appleyard * Sunday Times *
Vastly engaging ... a tremendously enjoyable and scholarly read. -- Natalie Haynes * Observer *
Sustaining the energy that such a topic demands for more than 600 pages, while providing a coherent answer to the question of why Rome expanded so spectacularly, is hugely ambitious. Beard succeeds triumphantly ... full of insights and delights ... SPQR is consistently enlivened by Beard's eye for detail and her excellent sense of humour. * Sunday Times *
Masterful ... This is exemplary popular history, engaging but never dumbed down, providing both the grand sweep and the intimate details that bring the distant past vividly to life * Economist *
Ground-breaking ... invigorating ... revolutionary ... a whole new approach to ancient history -- Thomas Hodgkinson * Spectator *
This book is a treasure, both as a fascinating read in itself and as a fine work of reference to correct our lazy misconceptions about an ancient world that still has much to instruct us today * Herald *
Praise for Mary Beard: 'She's pulled off that rare trick of becoming a don with a high media profile who hasn't sold out, who is absolutely respected by the academy for her scholarship ... what she says is always powerful and interesting * Guardian *
An irrepressible enthusiast with a refreshing disregard for convention * FT *
Dynamically, wittily and authoritatively brings the ancient world to life -- Simon Sebag Montefiore
With such a champion as Beard to debunk and popularise, the future of the study of classics is assured * Daily Telegraph *

Mary Beard is a professor of classics at Newnham College, Cambridge, and the classics editor of the TLS. She has world-wide academic acclaim. Her previous books include the bestselling, Wolfson Prize-winning Pompeii, The Roman Triumph, The Parthenon and Confronting the Classics. Her blog has been collected in the books It's a Don's Life and All in a Don's Day. She is in the 2014 top 10 Prospect list of the most influential thinkers in the world.

GOR007457683
SPQR: A History of Ancient Rome by Professor Mary Beard
Professor Mary Beard
Used - Very Good
Paperback
Profile Books Ltd
2016-04-01
608
1846683815
9781846683817
Winner of Blackwell's Book of the Year 2016 Short-listed for British Book Industry Awards Non-Fiction Book of the Year 2016 Short-listed for Waterstones Book of the Year 2015
Book picture is for illustrative purposes only, actual binding, cover or edition may vary.
This is a used book - there is no escaping the fact it has been read by someone else and it will show signs of wear and previous use. Overall we expect it to be in very good condition, but if you are not entirely satisfied please get in touch with us.