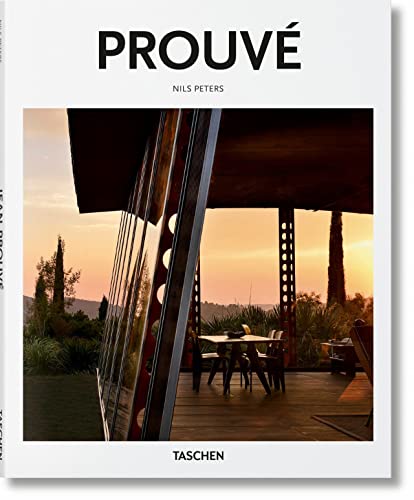 In Stock
£9.99
French architect and designer Jean Prouve innovated crisp, economical construction designs, marrying inexpensive materials and mass production with aesthetic elegance and technical brilliance. His simple, graceful style is an inimitable expression of midcentury innovation, expansion, and growth, and secured his place as one of the century's...
New£9.99
5 in stock

French-born Jean Prouve (1901-1984) was the 20th century's leading construction designer, a self-declared constructeur and member of the jury who oversaw the design of the Centre Pompidou in Paris. As a designer, he captured the midcentury spirit of innovation, expansion, and growth, developing techniques that united simple, striking aesthetics with practical, cost-effective materials and assembly.

From vast, temporary exhibition marquees to handheld letter openers, modular building systems to interior lighting, Prouve's designs efficiently fitted their function with minimal fuss and understated elegance. Feted by designers, architects, and engineers the world over, Prouve has left a rich and inspirational legacy, which resonates perfectly with the approach of this compact volume, neatly summarizing his life and works.

Nils Peters studied art history at the University of Hamburg, architecture at TFH Berlin, and urban sociology at Columbia University in New York. He has taught, published, and exhibited on the subject of architecture and has had his own practice since 1998. Peter Goessel runs an agency for museum and exhibition design. He has published TASCHEN monographs on Julius Shulman, R. M. Schindler, John Lautner, and Richard Neutra, as well as several titles in the Basic Architecture series.