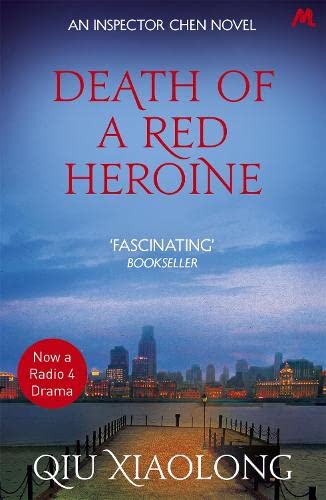 Death of a Red Heroine
by Qiu Xiaolong

Death of a Red Heroine Summary

Death of a Red Heroine: Inspector Chen 1 by Qiu Xiaolong

Shanghai in 1990. An ancient city in a country that despite the massacre of Tiananmen Square is still in the tight grip of communist control. Chief Inspector Chen, a poet with a sound instinct for self-preservation, knows the city like few others.

When the body of a prominent Communist Party member is found, Chen is told to keep the party authorities informed about every lead. Also, he must keep the young woman's murder out of the papers at all costs. When his investigation leads him to the decadent offspring of high-ranking officials, he finds himself instantly removed from the case and reassigned to another area.

Chen has a choice: bend to the party's wishes and sacrifice his morals, or continue his investigation and risk dismissal from his job and from the party. Or worse . . .

Death of a Red Heroine Reviews

Xiaolong's astute rendering of the many contradictions of contemporary Chinese life centres on the brilliant Inspector Chen . . . A series that might well get you hooked. * Sunday Telegraph *
Atmospheric and rich in behind the scenes detail . . . Morse of the Far East. * Independent *
Chen is a great creation, an honourable man in a world full of deception and treachery. * Guardian *
With strong and subtle characterisation, Qiu Xiaolong draws us into a fascinating world where the greatest mystery revealed is the mystery of present-day China itself. -- John Harvey
The first police whodunnit written by a Chinese author in English and set in contemporary China . . . its quality matches its novelty. * The Times *
The usual enjoyable mix of murder, poetry and contradictions of contemporary Chinese culture. Chen is a splendid creation. * Independent on Sunday *
A vivid portrait of modern Chinese society . . . full of the sights, sounds and smells of Shanghai . . . A work of real distinction. * Wall Street Journal *
Qiu Xiaolong is one of the brightest stars in the firmament of modern literary crime fiction. His Inspector Chen mysteries dazzle as they entertain, combining crime with Chinese philosophy, poetry and food, Triad gangsters and corrupt officials. * Canberra Times, Australia *
Gripping . . . Chen stands in a class with Martin Cruz Smith's Russian investigator, Arkady Renko, and P.D. James's Scotland Yard inspector, Adam Dalgliesh. * Publishers Weekly *
Wonderful. * Washington Post *

Qiu Xiaolong (pronounced 'Joe Shau-long') was born in Shanghai. The Cultural Revolution began in his last year of elementary school, and out of school, out of job, he studied English by himself in a local park.

Having won several awards for his poetry in English, he moved on to write a novel about contemporary Chinese society in transition, which developed into the critically acclaimed, award-winning Inspector Chen series. The series has been translated into sixteen languages. In addition, Qiu Xiaolong has published a poetry collection, several poetry translations, and a collection of linked stories (also serialized in Le Monde). He lives in St. Louis with his wife and daughter.

GOR010527487
Death of a Red Heroine: Inspector Chen 1 by Qiu Xiaolong
Qiu Xiaolong
As heard on Radio 4
Used - Like New
Paperback
Hodder & Stoughton General Division
2006-02-01
480
0340897503
9780340897508
N/A
Book picture is for illustrative purposes only, actual binding, cover or edition may vary.
The book has been read, but looks new. The book cover has no visible wear, and the dust jacket is included if applicable. No missing or damaged pages, no tears, possible very minimal creasing, no underlining or highlighting of text, and no writing in the margins.