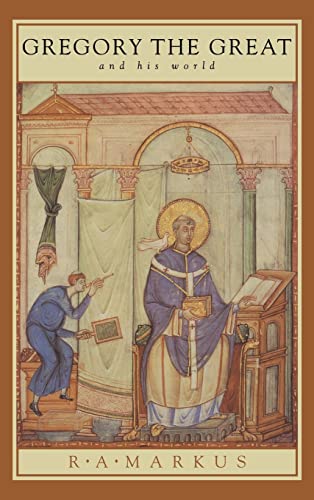 Gregory the Great and his World
by R. A. Markus (University of Nottingham)

In Stock
£33.99
This is a study of Gregory the Great, the pope who sent Augustine (of Canterbury) and his fellow missionaries to convert the heathen English to Christianity (597). The book deals with every aspect of Gregory's pontificate and thus will be a major contribution to the study of late antique society.
Very Good
Only 3 left

Gregory the Great and his World Summary

Gregory the Great and his World by R. A. Markus (University of Nottingham)

Markus's new and accessible work is the first full study of Gregory the Great since that of F. H. Dudden (1905) to deal with both Gregory's life and work as well as with his thought and spirituality. With his command of Gregory's works, Markus portrays vividly the daily problems of one of the most attractive characters of the age. Gregory's culture is described in the context of the late Roman educational background and in the context of previous patristic tradition. Markus seeks to understand Gregory as a cultivated late Roman aristocrat converted to the ascetic ideal, caught in the tension between his attraction to the monastic vocation and his episcopal ministry, at a time of catastrophic change in the Roman world. The book deals with every aspect of his pontificate: as bishop of Rome, as landlord of the Church lands, in his relations to the Empire, and to the Western Germanic kingdoms in Spain, Gaul, and, especially, his mission to the English.

Gregory the Great and his World Reviews

Preface; 1. Introduction: a contemplative in a troubled world; 2. Integritas animi: ministry in the Church; 3. Sapienter indoctus: scriptural understanding; 4. Appropinquante mundi termino: the world in its old age; 5. The Christian community and its neighbours; 6. Christiana respublica: within the confines of the Empire; 7. Terra mea: Italy between two worlds; 8. Argus luminosissimus: the pope as landlord; 9. Scissum corpus: the schism of the Three Chapters; 10. Ravenna and Rome: and beyond; 11. In cunctis mundi partibus; the Far West; 12. Inconcussam servare proviciam: dissent in Africa; Epilogue; Appendix: On the distribution of Gregory's correspondence; Glossary of terms for offices; Index to Gregory's works.

GOR004716287
Gregory the Great and his World by R. A. Markus (University of Nottingham)
R. A. Markus (University of Nottingham)
Used - Very Good
Hardback
Cambridge University Press
1997-10-09
268
0521584302
9780521584302
N/A
Book picture is for illustrative purposes only, actual binding, cover or edition may vary.
This is a used book - there is no escaping the fact it has been read by someone else and it will show signs of wear and previous use. Overall we expect it to be in very good condition, but if you are not entirely satisfied please get in touch with us.