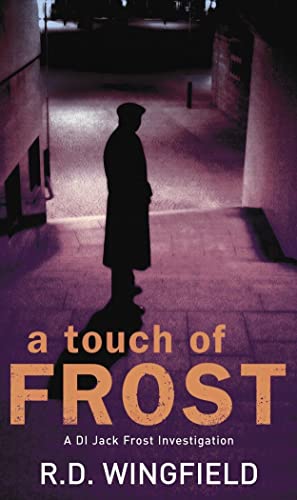 A Touch Of Frost
by R. D. Wingfield

A Touch Of Frost Summary

`A funny, frantic, utterly refreshing brew' - Sunday Telegraph Detective Inspector Jack Frost, officially on duty, is nevertheless determined to sneak off to a colleague's leaving party. But first the corpse of a well-known local junkie is found blocking the drain of a Denton public lavatory - and then the daughter of a wealthy businessman is reported missing. And now a wave of crime threatens to submerge sleepy Denton. A robbery occurs at the town's notorious strip joint, the pampered son of a local MP is suspected of a hit-and-run offence and, to top it all, a multiple rapist is on the loose. But the manic Frost manages to assure his superior that all is under control. Now he has only to convince himself...

A Touch Of Frost Reviews

"A funny, frantic, utterly refreshing brew" * Sunday Telegraph *
"What impresses most is the extraordinarily vivid interplay between the police characters. Frost himself is spendidly drawn" * The Times *

After a successful career writing for radio, R.D. Wingfield turned his attention to fiction and created the character of D.I. Jack Frost, who has featured in the titles A Touch of Frost, Frost at Christmas, Night Frost, Hard Frost, Winter Frost and A Killing Frost. The series has been adapted for television as the perennially popular A Touch of Frost starring David Jason. R.D. Wingfield died in 2007.

GOR001080174
A Touch Of Frost: (DI Jack Frost Book 2) by R. D. Wingfield
R. D. Wingfield
DI Jack Frost
Used - Very Good
Paperback
Transworld Publishers Ltd
1992-11-12
432
0552145556
9780552145558
N/A
Book picture is for illustrative purposes only, actual binding, cover or edition may vary.
This is a used book - there is no escaping the fact it has been read by someone else and it will show signs of wear and previous use. Overall we expect it to be in very good condition, but if you are not entirely satisfied please get in touch with us.