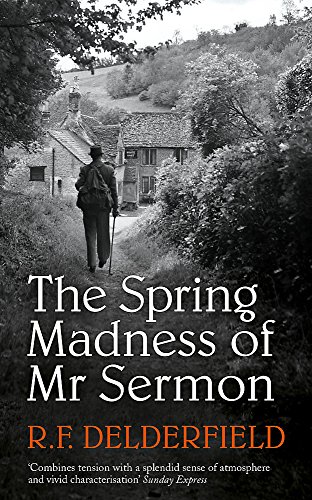 The Spring Madness of Mr Sermon
by R. F. Delderfield

Used Price
£7.19
New RRP £9.99
Free Shipping in the UK
From one of the twentieth century's bestselling authors, R.F. Delderfield, this is a book about one man's dissatisfaction with his small life, and his desire to break free.
Reviews:
Trustpilot
Very Good Well Read

The Spring Madness of Mr Sermon by R. F. Delderfield

It happened on the second day of the summer term. Was it caused by the smell of lilac, the droning of the bees, or the French incense which Lane-Perkins had set alight?

Nobody knew, but that spring afternoon following a heated exchange with a pupil, Sebastian Sermon, a forty-nine-year-old schoolmaster, experiences a brainstorm. Dissatisfied with his life, he leaves his job, wife and children, and takes to the road.

In the months that follow, Sebastian discovers that excitement and romance are not only for the young. He does things he has never done before and finds that he has talents which no one, least of all himself, had ever suspected . . .

Mr Delderfield's manner is easy, modest, heartwarming * Evening Standard *
R F Delderfield is a born storyteller * Sunday Mirror *
Sheer, wonderful storytelling * Chicago Tribune *
It is always a pleasure to read R F Delderfield, because he never seems to be ashamed of writing well * Books and Bookmen *
'He built an imposing artistic social history that promises to join those of his great forebears in the long, noble line of the English novel. His narratives belong in a tradition that goes back to John Galsworthy and Arnold Bennett' Life Magazine * Life Magazine *

R F Delderfield was born in South London in 1912. On leaving school he joined the Exmouth Chronicle newspaper as a junior reporter, where he went on to become Editor. From there he began to write stage plays and then became a highly successful novelist, renowned for brilliantly portraying slices of English life. With the publication of his first saga, A Horseman Riding By, he became one of Britain's most popular authors. Many of his bestselling novels were later adapted for television. He died in 1972.

GOR001239858
The Spring Madness of Mr Sermon by R. F. Delderfield
R. F. Delderfield
Used - Very Good
Paperback
Hodder & Stoughton
1982-11-01
320
0340286423
9780340286425
N/A
Book picture is for illustrative purposes only, actual binding, cover or edition may vary.
This is a used book - there is no escaping the fact it has been read by someone else and it will show signs of wear and previous use. Overall we expect it to be in very good condition, but if you are not entirely satisfied please get in touch with us.