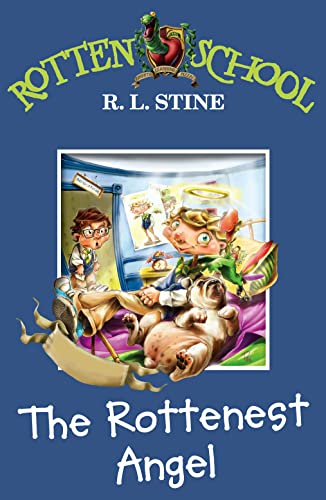 Hilarious new series of wacky stories from a US boarding school where naughty pranks and mischief rate much more highly than education. From bestselling US author, R.L. Stine.

Hilarious new series of wacky stories from a US boarding school where naughty pranks and mischief rate much more highly than education. From bestselling US author, R.L. Stine.

Welcome to Rotten School, founded 100 years ago by I. B. Rotten as a boarding school where students would grow and succeed intellectually, morally and physically as they prepared for a productive and happy future. However, today our standards are a little less rigorous - we are simply happy if the students are still alive at the end of each day!

Angel Goodeboy is a perfect angel. He even wears a T-shirt that says "Mommy's Little Angel." When Mrs Heinie makes Bernie share his room with Angel, Bernie soon discovers that Angel ain't no angel. The little sneak takes over Bernie's room, steals Bernie's friends and charms Bernie's girlfriend. But how can Bernie get rid of an angel?

Robert Lawrence Stine is one of the bestselling children's authors in history. He began his writing career at the age of nine writing short stories, joke books, and comic books for his friends and has been at it ever since!

After graduating from Ohio State University, Stine moved to New York. He wrote Fear Street and then Goosebumps, the phenomenal series that made him the number-one bestselling children's author (Guinness World Records). He published two original collections of scary stories - the New York Times bestseller Nightmare Hour and The Haunting Hour.

Stine lives in Manhattan with his wife, Jane, and their son, Matthew.

GOR003572308
The Rottenest Angel (Rotten School, Book 10) by R. L. Stine
R. L. Stine
Rotten School
Used - Very Good
Paperback
HarperCollins Publishers
2008-01-01
128
0007216262
9780007216260
N/A
Book picture is for illustrative purposes only, actual binding, cover or edition may vary.
This is a used book - there is no escaping the fact it has been read by someone else and it will show signs of wear and previous use. Overall we expect it to be in very good condition, but if you are not entirely satisfied please get in touch with us.