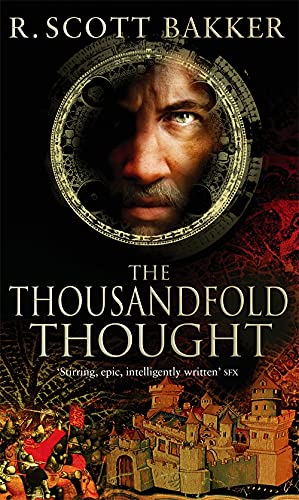 The Thousandfold Thought: Book 3 of the Prince of Nothing by R. Scott Bakker

'[Bakker] clamps his hand over yours and simply does not let go...Amid the cluttered shelves of the Epic Fantasy genre, Bakker is a name that stands out among not just the new writers in the crowd but established and recognized names.' - SFFWORLD

'The entire series is going to set a new standard for fantasy writers everywhere.' - THE ALIEN ONLINE

All opposition to the man once derided as the Prince of Nothing has vanished or been vanquished. Their leaders slain, the heathen Fanim have fled in disarray. One final march will bring the Holy War to the fabled city of Shimeh. But so very much has changed.

Anasurimbor Kellhus, the Warrior-Prophet, now leads the Men of the Tusk. The cuckolded sorcerer Achamian serves as his tutor, betraying his school to keep safe the man he believes can prevent the Second Apocalypse. The Scylvendi barbarian, Cnaiur, succumbs finally to madness. The Consult, sensing the endgame of millennia of planning, work frantically to prepare for the coming of the No-God.

The final reckoning is at hand. Faceless assassins will strike in the dead of night. Kings and Emperors will fall. The sorcerous Schools will be unleashed. And Anasurimbor Kellhus will at last confront his father and the dread revelation of the Thousandfold Thought.

The epic conclusion to the acclaimed Prince of Nothing trilogy.

Novels
Neuropath
Disciple of the Dog
Light, Time, and Gravity

Exquisitely intelligent and beautifully written...this is fantasy with muscle and brains, rife with intrigue and admirable depth of character, set in a world laden with history and detail. -- Steve Erikson, author of GARDENS OF THE MOON
in a very short time, author R. Scott Bakker has proven that he is well on his way to building a universe that is arguably comparable with those created by the likes of Frank Herbert ("Dune") and Isaac Asimov ("Foundation")...a universe so satisfyingly detailed you [feel] as though you could slip inside. -- JANUARY MAGAZINE
A journey unlike any other you have experienced. Part Dante's "Inferno" and part Conrad's "Heart Of Darkness", this is fantasy literature like you've never read before. -- BLOGCRITICS
In the shattering climax to Canadian author Bakker's magnificent fantasy saga (after 2005's The Warrior-Prophet), the Holy War army has finally reached the gates of the holy city of Shimeh. The warrior-prophet, Anasurimbor Kellhus, learns that the Thousandfold Thought, a great "transition rule" that promises to transform the two warring faiths of Inrithism and Fanimry, offers the only way to bring peace to the world of Earwa and avoid a Second Apocalypse. Amid all the bloodshed and battle, Kellhus continues to respect his friend, the sorcerer Drusas Achamian, despite the conflict that arises when Kellhus takes "the whore Esmenet," hitherto Achamian's woman, as his consort. Esmenet's wavering love between the two men lends poignancy and personal depth to an epic story notable for its lack of melodrama. A large and varied supporting cast of heroes and scoundrels add further emotional realism. The Prince of Nothing trilogy is a work of unforgettable power. * PUBLISHERS WEEKLY *
The Thousandfold Thought concludes with a tour-de-force set piece in which Bakker cuts back and forth between the battle for Shimeh - which must count as among the greatest descriptions of sorcery in war ever recorded - and each of his main characters as * Readers will be grateful for the Encyclopedic Glossary, a nearly 100-page-long treasure trove of essential information about everyone and everything in The Prince of Nothing. An absorbing read in its own right, it's an indispensable reference guide for vo *
REALMS OF FANTASY * 'Few fantasies come more apocalyptic than R Scott Bakker's Prince of Nothing sequence' *
THE GUARDIAN; * '[R. Scott Bakker is a] class act like George R. R. Martin, or his fellow Canadians Steven Erikson and Guy Gavriel Kay. . .very impressive.' *

R. Scott Bakker is a student of literature, history, philosophy and ancient languages. He divides his time between writing philosophy and fantasy, though he often has difficulty distinguishing between them. He lives in London, Ontario.

GOR001777232
The Thousandfold Thought: Book 3 of the Prince of Nothing by R. Scott Bakker
R. Scott Bakker
Prince of Nothing
Used - Very Good
Paperback
Little, Brown Book Group
2007-05-03
672
1841494127
9781841494128
N/A
Book picture is for illustrative purposes only, actual binding, cover or edition may vary.
This is a used book - there is no escaping the fact it has been read by someone else and it will show signs of wear and previous use. Overall we expect it to be in very good condition, but if you are not entirely satisfied please get in touch with us.