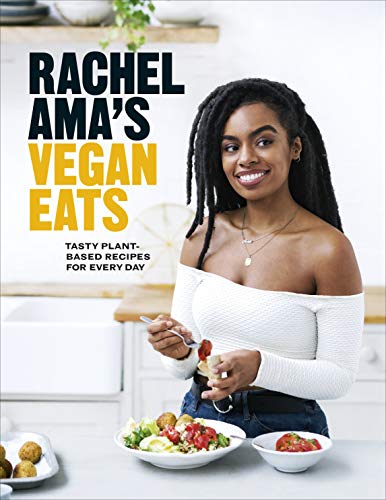 'this book is filled with recipes that look so very, very good to eat.' NIGELLA LAWSON
'it's refreshing that Rachel Ama is, in many ways, just herself' RUBY TANDOH

No bland or boring dishes, and forget all-day cooking. Rachel takes inspiration from naturally vegan dishes and cuisines as well as her Caribbean and West African roots to create great full-flavour recipes that are easy to make and will inspire you to make vegan food part of your daily life.

Rachel's recipes are quick and often one-pot; ingredients lists are short and supermarket-friendly; dishes can be prepped-ahead and, most importantly, she has included a song with each recipe so that you have a banging playlist to go alongside every plate of delicious food.

So if you share Rachel's attitude that vegan food should fit into your life with ease and pleasure - whether you are a fully fledged vegan looking for new ideas, want to reduce your meat intake, make more environmentally friendly food choices, or just keen to eat more veg - Rachel's genius cookbook is for you.

What's not to like about Rachel Ama?
This book is filled with recipes that look so very, very good to eat
These days, there seem to be more vegan food writers and influencers than you can shake a carrot stick at, yet Rachel stands out thanks to her relaxed, telegenic manner, her funky dance moves and her bold, inventive Afro-Caribbean flavours, which draw on her heritage * SUNDAY TIMES *
It's refreshing that Rachel Ama is, in many ways, just herself
A cracking debut cookbook, and a raft of recipes inspired by her roots * BA Highlife Magazine *

Since launching her YouTube channel in September 2017 Rachel Ama has amassed a legion of followers who are all hungry for her simple, affordable and delicious vegan recipes and recommendations (and for her dance moves).

Rachel Ama knows the London vegan scene inside-out but she also looks abroad for flavour inspiration, and to both her Caribbean and African roots. Rachel grew up in North London with her Mum, who encouraged lots of veggies (there was no "treat drawer" in their house) and was really into holistic living and studied nutrition. Rachel very much brought vegan cooking home and would take staple Caribbean recipes (inspiration from her Sierra Leonean and St Lucian roots) and make vegan alternatives still packed with traditional spices and flavours. Rachel also has a grandma from Wales so was inspired to make some British classics vegan.

A self-confessed KFC addict as a teenager, she decided to go vegan three years ago and hasn't looked back. As her passion for plants grew and grew, so did her interest in cooking - and her belief that vegan food need not compromise on taste or nutrition. Rachel travelled around South America after University and was inspired by how each country offered a completely different palette of flavours, confirming her love for food and cooking.

Rachel loves to exercise and dispels the belief that veganism gives you no energy - she loves boxing and trying out new exercises like Muay Thai. She lives in North London with her Cockapoo, Marlee.