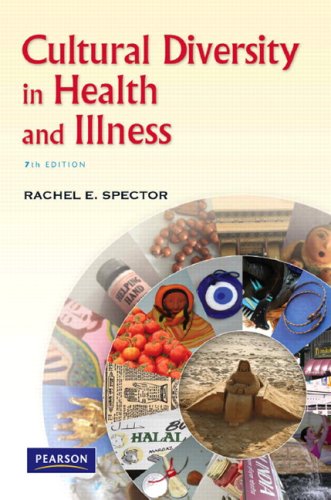 Cultural Diversity in Health and Illness
by Rachel E. Spector

The seventh edition of this well-respected book continues to promote an awareness of the dimensions and complexities involved in caring for people from diverse cultural backgrounds. Completely revised and updated, it examines the differences existing within North America by probing the health care system and consumers, and examples of traditional health beliefs and practices among selected populations. An emphasis on the influences of recent social, political, and demographic changes helps to explore the issues and perceptions of health and illness today. An essential for any health-care professional, this book sets the standard for cultural perspectives.

Dr. Rachel E. Spector has been a student of culturally diverse HEALTH and ILLNESS beliefs and practices for 35 years and has researched and taught courses on culture and HEALTH care for the same time span. Dr. Spector has had the opportunity to work in many different communities, including the American Indian and Hispanic communities in Boston, Massachusetts. Her studies have taken her to many places: most of the United States, Canada, and Mexico; several European countries, including Denmark, England, Finland, Iceland, Italy, France, Russia, Spain, and Switzerland; Israel and Pakistan; and Australia and New Zealand. She was fortunate enough to collect traditional amulets and remedies from many of these diverse communities and to meet practitioners of traditional HEALTH care in several places. She was instrumental in the creation and presentation of the exhibit "Immigrant HEALTH Traditions" at the Ellis Island Immigration Museum, May 1994 through January 1995. She and has exhibited HEALTH-related objects in several other settings. Recently, she served as a Colaboradora Honorifica (Honorary Collaborator) in the University of Alicante in Alicante, Spain, and Tamulipus, Mexico. In 2006, she was a Lady Davis Fellow in the Henrietta Zold-Hadassah Hebrew University School of Nursing in Jerusalem, Israel. This text was translated into Spanish by Maria Munoz and published in Madrid by Prentice Hall as Las Culturas de la SALUD in 2003. She is a Fellow in the American Academy of Nursing and a Scholar in Transcultural Nursing Society. The Massachusetts Association of Registered Nurses, the state organization of the American Nurses' Association, honored her as a "Living Legend" in 2007. In 2008 she was recognized by the American Nurses' Association for her work in Human Rights.

A WORD ABOUT HEALTH

National Standards for Culturally and Linguistically Appropriate Services in CULTURALCARE

Trends in Development of the Health Care System

Medicine as an Institution of Social Control

CHAPTER9 HEALTH and ILLNESS in the Asian Populations

CHAPTER 10 HEALTH and ILLNESS in the Black Population

CHAPTER 11 HEALTH and ILLNESS in the Hispanic Populations

CHAPTER 12 HEALTH and ILLNESS in the White Populations

GOR009933685
Cultural Diversity in Health and Illness: United States Edition by Rachel E. Spector
Rachel E. Spector
Used - Very Good
Paperback
Pearson Education (US)
2008-07-09
432
0135035899
9780135035894
N/A
Book picture is for illustrative purposes only, actual binding, cover or edition may vary.
This is a used book - there is no escaping the fact it has been read by someone else and it will show signs of wear and previous use. Overall we expect it to be in very good condition, but if you are not entirely satisfied please get in touch with us.