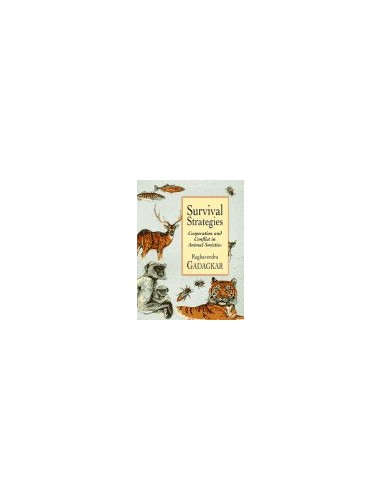 In Stock
£9.99
Tasmanian hens have two husbands and cellular slime molds commit suicide. Why creatures behave in such ways is explained in this account of the evolutionary foundations of animal social behaviour. Strategies of cooperation and conflict from lions to wasps are explored.
Very Good
Only 1 left

Tasmanian hens have two husbands, cellular slime molds commit suicide, vampire bats will share food with hungry fellow bats and hanuman langurs commit infanticide. Why creatures great and small behave in such ways is explained in this account of the evolutionary foundations of animal social behaviour. Only in recent years have biologists and ethologists begun to apply evolutionary thinking to the study of animal societies. This book presents the some of these findings, with insights into the myriad strategies that animals have developed to perpetuate their kind. Raghavendra Gadagkar explores the strategies of cooperation and conflict adopted by animals from the lordly lion to the primitive wasp worker as they choose mates, raise their young, communicate with others, and establish the division of labour necessary to feed and protect the group and safeguard their territory. Whether focusing on the birds or the bees, this book offers both descriptions and explanations of many different behaviours encountered in the animal world: why a ground squirrel will sound an alarm - even risk its own safety - to warn fellow squirrels of impending danger; why weaver ant larvae donate silk for nest building; why house mice raise their offspring in a communal nursery; and how animals can recognize the relatives they want to favour or avoid. Illustrated with both photographs and explanatory diagrams, this tour of the social world of animals will inform readers curious about the motivations behind the range of activity in the animal kingdom.

An easy to read introduction to the evolutionary principles that control the evolution of social strategies of conflict and cooperation...This can be an excellent reading for people interested in the deeper origins of complex social cognition.
A surprisingly up-to-date and thorough review of survival behavior mechanisms of animals... It includes intriguing cameos of examples of how different species survive, focussing on insects, mammals, birds, and fish. A very readable and inspiring volume.
Altruism, selfishness, nepotism: such typically human characteristics appear to exist in the animal world, too. Raghavendra Gadagkar's "Survival Strategies" is an elegantly written discussion of whether they really do, and what could account for this kind of social behavior in animals. The author weaves in the most recent evolutionary explanations of the strategies animals adopt for their survival. Irresistible and well illustrated.
Gadagkar examines the fine balance of cooperation and conflict inherent in the social behavior that leads to such diverse phenomena as sterile worker bees, suicidal cellular slime molds, and alarm calls among ground squirrels. While it is easy to see, for example, how queen bees "exploit" sterile workers, Gadagkar shows how worker bees also exploit the queen...Gadagkar's clear prose avoids heavy mathematical digression. Highly recommended for both general and academic collections. -- Bruce Neville "Library Journal"
Why ever would an animal do something nice, when the popular conception of survival-of-the-fittest implies every animal behaves as selfishly as possible? In this insightful and cogently written work, Gadagkar explores that paradox and proposes that making nice means living longer and therefore increasing the individual's chance of reproducing. Natural selection of genes, then, and not some learned behavior, is at work...Presenting a rich lode of examples and incorporating then with evolutionary theory, Gadagker delivers a lecture sure to energize budding bugologists. -- Gilbert Taylor "Booklist"
Happily, "Survival Strategies" makes sure that the reader never gets wrapped up in the human connotations of cooperation, conflict and society and never loses sight of natural selection as the arbiter of all things natural and no things moral... It is a well-presented exposition of the fundamentals of sociobiology... and would be an excellent course companion for introductory lectures...The author also tackles the more paradigmatic aspects of ethology, including the relationship between the causes of a behavior and its function, the antagonism between different levels of selection (gene, animal, group), the question of genetic determinism, evolutionarily stable strategies, and the relevance of conscious experience to adaptive behavior. These are perennial and oft-muddled issues...of general interest beyond ethology. -- Thomas Sambrook "Times Higher Education Supplement"

GOR004685602
Survival Strategies: Cooperation and Conflict in Animal Societies by Raghavendra Gadagkar
Raghavendra Gadagkar
Used - Very Good
Hardback
Harvard University Press
1998-01-30
204
0674170555
9780674170551
N/A
Book picture is for illustrative purposes only, actual binding, cover or edition may vary.
This is a used book - there is no escaping the fact it has been read by someone else and it will show signs of wear and previous use. Overall we expect it to be in very good condition, but if you are not entirely satisfied please get in touch with us.