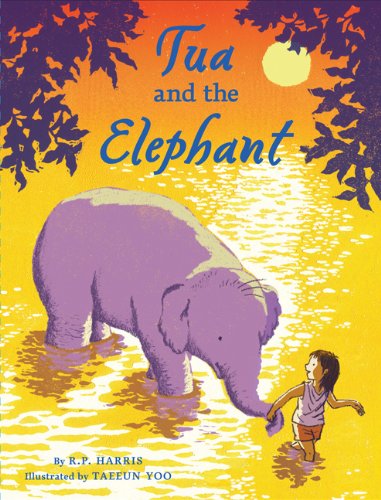 Tua and the Elephant
by Randal Harris

In Stock
£14.99
In Chiang Mai, Thailand, nine-year-old Tua releases an abused elephant from its chains--can she complete the rescue by getting it to an elephant refuge without being caught herself?
Very Good
Only 1 left

Tua and the Elephant Summary

Tua and the Elephant by Randal Harris

Nine-year-old Tua (Thai for peanut) has grown up with everything she needs in the bustling town of Chiang Mai, Thailand. Everything except a sister. But then one day in the market she makes a new friend. Not one with pigtails and a sparkling laugh, but a curious trunk and wise, old eyes. Tua has met an elephant. And this elephant needs her help. Together Tua and Pohn-Pohn go on a remarkable journey to escape from the vile trainers who had kept the elephant in chains. From the bustling night market to the hallowed halls of a Buddhist temple, and finally the sanctuary of an elephant refuge, this clever girl and her companion find exactly what they need: each other.

Tua and the Elephant Reviews

Randal Harris has travelled the world with his wife, spending much time in Asia, including three months in Thailand, where this story was born. He has been a bartender in North Beach for more than 30 years, but is currently living in Shanghai, China. This is his first book. Taeeun Yoo has illustrated a number of picture books, and in 2009 she received the Society of Illustrators in America Founders Awar for the most promising new talent of the year. Born and raised in Korea, Yoo now lives in New York City.

GOR009938169
Tua and the Elephant by Randal Harris
Randal Harris
Used - Very Good
Hardback
Chronicle Books
2011-11-01
192
0811877817
9780811877817
Short-listed for Bluebonnet Awards 2014 Short-listed for Nene Award 2015
Book picture is for illustrative purposes only, actual binding, cover or edition may vary.
This is a used book - there is no escaping the fact it has been read by someone else and it will show signs of wear and previous use. Overall we expect it to be in very good condition, but if you are not entirely satisfied please get in touch with us.