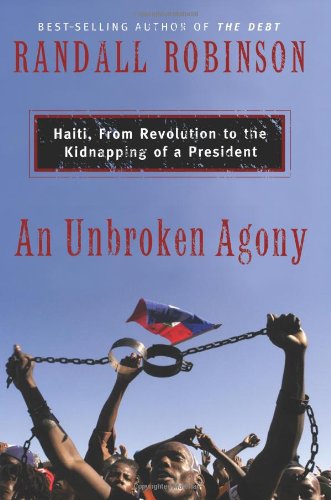 An Unbroken Agony
by Randall Robinson

In Stock
£2.99
On February 29, 2004, the democratically elected president of Haiti was forced to leave the country as marauding bands of rebels - resplendent in their American military issue and brandishing new M16 and CAR-15 machine guns - descended on the capital of Port-au-Prince. This book explores the tragic history of Haiti.
Very Good
Only 2 left

An Unbroken Agony: Haiti, from Revolution to the Kidnapping of a President by Randall Robinson

Bestselling author and bold social commentator Randall Robinson explores the singularly curious and ultimately tragic history of Haiti. On February 29, 2004, the democratically elected president of Haiti was forced to leave the country as marauding bands of rebels - resplendent in their American military issue and brandishing new M16 and CAR-15 machine guns - descended on the capital of Port-au-Prince. Jean-Bertrand Aristide repeatedly sought aid from President Bush but, as Colin Powell put it, the United States had "frankly, no enthusiasm: for doing anything about what was transpiring in Haiti." Randall Robinson - one of America's foremost African American voices - explores the history of this island nation. Haiti begins with the present anarchic disrepair of modern Haiti and looks back to see how this grew from such a heroic struggle for emancipation. In the late 1700s an army of Haitian slaves overwhelmed the French forces of Napoleon Bonaparte, Spain, and England to win their freedom and wrench from France the crown jewel of their colonial empire. The loss of this foothold virtually ended France's ambition in the Americas and enabled the fledgling United States to make the Louisiana Purchase. From one revolution to another, Haiti has changed the fate of empires yet has not been able to live up to the promise of its birth.

"Engaging.... Robinson continues an important conversation.... His anecdotes support his attempts to reclaim African heritage and empower African Americans."
"Incisive...keenly observed, perceptively written.... Some of the most beautifully written anecdotes and carefully crafted prose ever seen in a book with such political purpose."
"Randall Robinson is the greatest Pro-Africa Freedom Fighter of his generation in America, his powerful poignant story of personal and political struggle is one of vision, courage, and sacrifice." -- Cornel West
"A tour de force.... Heartfelt, impassioned."
"In a manner strikingly reminiscent of James Baldwin, Robinson combines acute insight, attention to the obvious but overlooked, and unpretentious breadth of vision."

Randall Robinson is the founder and former president of TransAfrica, the African-American advocacy organization he established to promote constructive and enlightened U.S. policies toward Africa and the Caribbean. The author of The Debt, The Reckoning, and Defending the Spirit, he lives with his wife and daughter in St. Kitts.

GOR004387436
An Unbroken Agony: Haiti, from Revolution to the Kidnapping of a President by Randall Robinson
Randall Robinson
Used - Very Good
Hardback
INGRAM PUBLISHER SERVICES US
2007-08-02
304
0465070507
9780465070503
N/A
Book picture is for illustrative purposes only, actual binding, cover or edition may vary.
This is a used book - there is no escaping the fact it has been read by someone else and it will show signs of wear and previous use. Overall we expect it to be in very good condition, but if you are not entirely satisfied please get in touch with us.