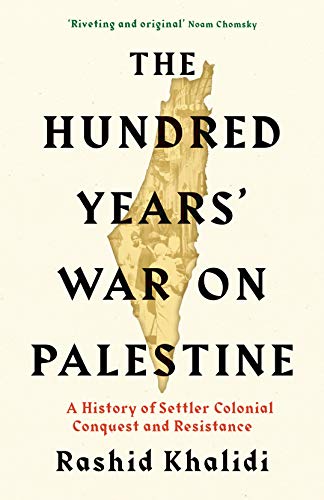 The Hundred Years' War on Palestine
by Rashid I. Khalidi

The Hundred Years' War on Palestine: A History of Settler Colonial Conquest and Resistance by Rashid I. Khalidi

'Riveting and original ... a work enriched by solid scholarship, vivid personal experience, and acute appreciation of the concerns and aspirations of the contending parties in this deeply unequal conflict ' Noam Chomsky The twentieth century for Palestine and the Palestinians has been a century of denial: denial of statehood, denial of nationhood and denial of history. The Hundred Years War on Palestine is Rashid Khalidi's powerful response. Drawing on his family archives, he reclaims the fundamental right of any people: to narrate their history on their own terms. Beginning in the final days of the Ottoman Empire, Khalidi reveals nascent Palestinian nationalism and the broad recognition by the early Zionists of the colonial nature of their project. These ideas and their echoes defend Nakba - the Palestinian term for the establishment of the state of Israel - the cession of the West Bank and Gaza to Jordan and Egypt, the Six Day War and the occupation. Moving through these critical moments, Khalidi interweaves the voices of journalists, poets and resistance leaders with his own accounts as a child of a UN official and a resident of Beirut during the 1982 seige. The result is a profoundly moving account of a hundred-year-long war of occupation, dispossession and colonisation.

Khalidi is rigorous and lucid in assembling his argument, piling up evidence but fair-minded to his opponents and withering about the shortcomings of his side. -- David Gardner * FT *
Riveting and original ... a work enriched by solid scholarship, vivid personal experience, and acute appreciation of the concerns and aspirations of the contending parties in this deeply unequal conflict -- Noam Chomsky
The best book to appear on the struggle for Palestine. It is masterpiece and a milestone in modern scholarship on the Arab-Israeli conflict ... a must read -- Avi Shlaim
This is the first true people's history of the hundred year struggle of the Indigenous Palestinian people, resisting and surviving Anglo imperialism and Israeli state colonization, taking a page from the United States' colonization of the Indigenous of North America. In historian Rashid Khalidi's hands, this is a beautifully written text, a tribute to the Palestinian people and a call for justice and self-determination -- Roxanne Dunbar Ortiz author of A People's History of the United States
learned and clear-eyed ... a compelling summary of the long war to deny Palestinian rights [which] exposes the blunders, misjudgments, and willful deceptions that have denied Palestinians the rights that most of us take for granted. Highly recommended -- Stephen Walt, Professor of International Affairs Harvard Kennedy School
A remarkable interweaving of three distinctive narratives. One is a deeply researched history of the past century of struggle between Zionist aspirations and Palestinian resistance. Newcomers and specialists alike will learn much from reading this sweeping account. Second is an analytical framework that places this conflict within the frame of settler colonialism, albeit a variant with its own special characteristics. Whether one agrees or not with this framing, Khalidi's analysis must be taken seriously and cannot be easily dismissed. Finally, there is the interweaving of a personal history -- his own and that of his family and friends -- which has the effect of making this otherwise sad historical narrative come alive with real people grappling with enormously challenging issues, but doing so with intelligence, determination, and a real concern for values of justice and equity. While Khalidi is an unapologetic supporter of national rights for Palestinians, he also recognizes, in his conclusions, that Zionism has succeeded in the past century in creating a strong Hebrew-based national movement in Palestine, and that the challenge for the future is for these two peoples who claim the same land to find a way toward a form of coexistence that is based firmly on equal rights and mutual recognition of legitimate claims to national identity," -- William B. Quandt, Professor Emeritus, University of Virginia
For those who want to learn about the course of the Israel-Palestine conflict up till now, and are open-minded: read this book. It comes over as a brilliant synthesis of high scholarship and experience, fair-minded despite its overtly Palestinian leanings, and highly readable. Americans and Israelis especially should read it, including the younger, more liberal ones, into whose hands the fates of both of the legitimate nations in this region must now pass. Please don't let this go on for another hundred years -- Bernard Porter * Jacobin *
informed and passionate -- Matthew Hughes * Guardian *
Praise for Rashid Khalidi 'For those of us who believe that a two-state solution ... Rashid Khalidi's trenchant analysis is powerful and disturbing.' -- Jeffrey Sachs, author of The End of Poverty
Rashid Khalidi's extraordinary book [Resurrecting Empire] is enormously relevant for our times -- Joseph Stiglitz

About Rashid I. Khalidi

Professor Rashid I. Khalidi is a Palestinian-American historian and the Edward Said professor of Modern Arab Studies at Columbia University and the co-editor of the Journal of Palestine. His previous books include Palestinian Identity, the Iron Cage, and Brokers of Deceit.

NGR9781781259337
The Hundred Years' War on Palestine: A History of Settler Colonial Conquest and Resistance by Rashid I. Khalidi
Rashid I. Khalidi
New
Hardback
Profile Books Ltd
2020-02-06
336
178125933X
9781781259337
N/A
Book picture is for illustrative purposes only, actual binding, cover or edition may vary.
This is a new book - be the first to read this copy. With untouched pages and a perfect binding, your brand new copy is ready to be opened for the first time.