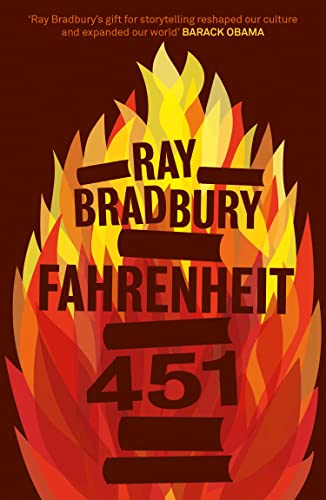 The hauntingly prophetic classic novel set in a not-too-distant future where books are burned by a special task force of firemen.

The hauntingly prophetic classic novel set in a not-too-distant future where books are burned by a special task force of firemen.

Guy Montag is a fireman. His job is to burn books, which are forbidden, being the source of all discord and unhappiness. Even so, Montag is unhappy; there is discord in his marriage. Are books hidden in his house? The Mechanical Hound of the Fire Department, armed with a lethal hypodermic, escorted by helicopters, is ready to track down those dissidents who defy society to preserve and read books.

The classic novel of a post-literate future, `Fahrenheit 451' stands alongside Orwell's `1984' and Huxley's `Brave New World' as a prophetic account of Western civilization's enslavement by the media, drugs and conformity.

Bradbury's powerful and poetic prose combines with uncanny insight into the potential of technology to create a novel which over fifty years from first publication, still has the power to dazzle and shock.

`Another indispensible classic' The Times

`Bradbury's is a very great and unusual talent'
Christopher Isherwood

'It is impossible not to admire the vigour of his prose, similes and metaphors constantly cascading from his imagination' Spectator

'As a science fiction writer, Ray Bradbury has long been streets ahead of anyone else' Daily Telegraph

`No other writer uses language with greater originality and zest. he seems to be a American Dylan Thomas - with dsicipline' Sunday Telegraph

GOR001224012
Fahrenheit 451 by Ray Bradbury
Ray Bradbury
Used - Very Good
Paperback
HarperCollins Publishers
1993-06-30
192
0006546064
9780006546061
N/A
Book picture is for illustrative purposes only, actual binding, cover or edition may vary.
This is a used book - there is no escaping the fact it has been read by someone else and it will show signs of wear and previous use. Overall we expect it to be in very good condition, but if you are not entirely satisfied please get in touch with us.