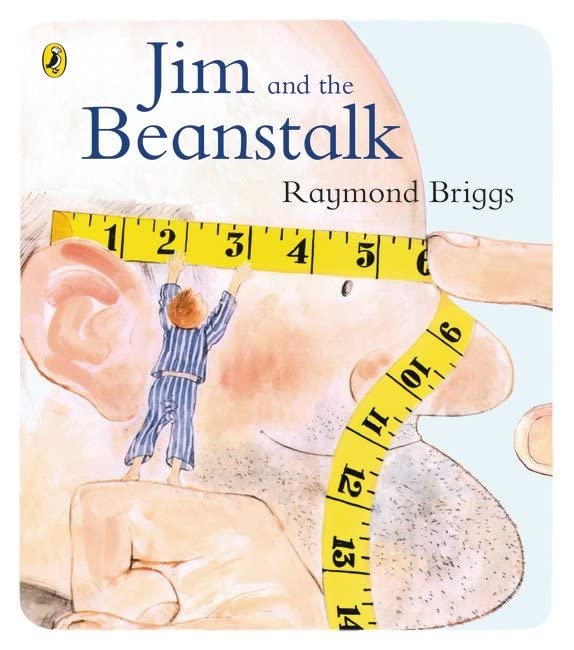 Jim and the Beanstalk
by Raymond Briggs

In Stock
£7.49
Jim finds a beanstalk growing outside his window one morning, and follows his famous predecessor up to the top...
Very Good Well Read
5 in stock

Jim and the Beanstalk Summary

Jim and the Beanstalk by Raymond Briggs

A wonderful retelling from Snowman-author Raymond Briggs - Jim and the Beanstalk.

A re-telling of the classic children's story by the author and illustrator of the best-selling Snowman. Jim finds a beanstalk growing outside his window one morning, and follows his famous predecessor up to the top . . .

Other books by Raymond Briggs:

Raymond Briggs is one of our most respected and beloved artists. Born in Wimbledon Park in 1934, he studied at the Wimbledon School of Art and later at the Slade School of Fine Art, and went on to produce a treasure trove of work. He has created characters that are now icons for generations of children, including Fungus the Bogeyman, Father Christmas and, of course, the beloved Snowman. The biography of his parents in graphic novel form, Ethel & Ernest, became a bestseller in the UK, and an animated feature film based on the novel was released in 2016. He has won many awards over his career including the Kurt Maschler Award, The Children's Book of the Year, Dutch Silver Pen Award, and the prestigious Kate Greenaway Award twice for his Mother Goose Nursery Treasury and Father Christmas. In 2017 Raymond was awarded the Booktrust Lifetime Achievement Award. He lives in Sussex.

GOR001198877
Jim and the Beanstalk by Raymond Briggs
Raymond Briggs
Used - Very Good
Paperback
Penguin Books Ltd
1973-01-25
40
0140500774
9780140500776
N/A
Book picture is for illustrative purposes only, actual binding, cover or edition may vary.
This is a used book - there is no escaping the fact it has been read by someone else and it will show signs of wear and previous use. Overall we expect it to be in very good condition, but if you are not entirely satisfied please get in touch with us.