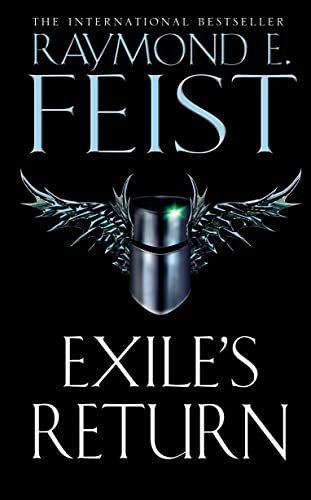 The penultimate volume in The Conclave of Shadows from worldwide bestselling author Raymond E Feist. Featuring one of the most fascinating characters and scenarios ever created in the genre. The series promises to become one of the great all-time classics in the field.

The penultimate volume in The Conclave of Shadows from worldwide bestselling author Raymond E Feist. Featuring one of the most fascinating characters and scenarios ever created in the genre. The series promises to become one of the great all-time classics in the field.

Once absolute ruler of his nation Kaspar, former Duke of Olasko, has been cast into exile. Abandoned in the wilds of a continent on the other side of the world and left with nothing but his wits and determination, he must fight merely to survive. Armed with guile, cunning and an iron will, he starts his odyssey with a single goal: to return to his home and revenge himself upon the man who cast him down, Talwin Hawkins.

But fate has other plans for Kaspar, and as he struggles against adversity, he encounters dangers greater than any he had imagined. More is at stake than he realised and Kaspar is but a single player in a far greater game than he imagined, for pitted against the Conclave of Shadows are the agents of the Dark Empire, a looming menace that threatens not only Kaspar's homeland, but the entire world of Midkemia.

Raymond E. Feist was born and raised in Southern California. He was educated at the University of California, San Diego, where he graduated with honours in Communication Arts. As well as his bestselling Riftwar novels, he is co-author (with Janny Wurts) of Daughter of the Empire, Servant of the Empire and Mistress of the Empire.

GOR001252268
Exile's Return (Conclave of Shadows, Book 3) by Raymond E. Feist
Raymond E. Feist
Conclave of Shadows
Used - Very Good
Paperback
HarperCollins Publishers
2005-09-05
368
0006483593
9780006483595
N/A
Book picture is for illustrative purposes only, actual binding, cover or edition may vary.
This is a used book - there is no escaping the fact it has been read by someone else and it will show signs of wear and previous use. Overall we expect it to be in very good condition, but if you are not entirely satisfied please get in touch with us.