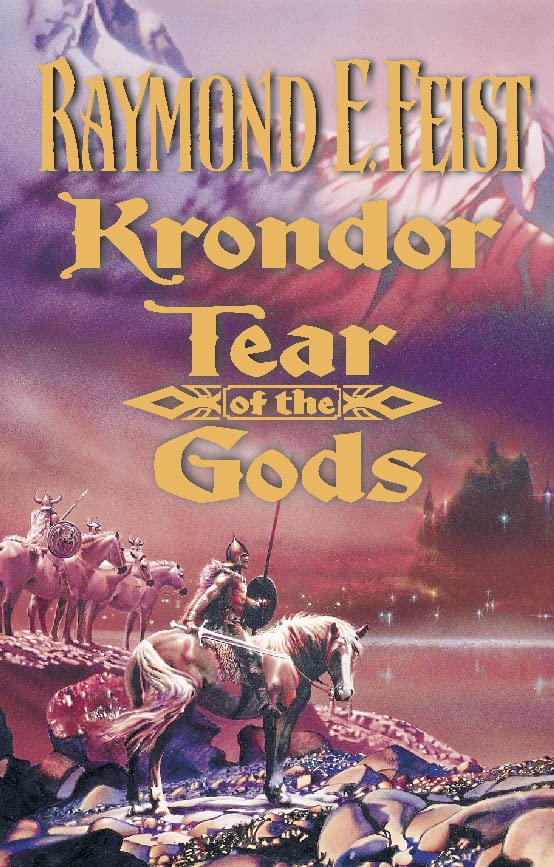 Krondor: Tear of the Gods
by Raymond E. Feist

Krondor: Tear of the Gods Summary

Krondor: Tear of the Gods (The Riftwar Legacy, Book 3) by Raymond E. Feist

A DROP IN THE OCEAN?

A raid upon the high seas signals an attack of unprecedented magnitude by the forces of darkness. For the holiest of holies, the Tear of the Gods has been lost to the Temple of Ishap. After a raid planned by Bear, one of the most brutal pirates to sail the Bitter Sea, goes dramatically wrong, the colossal gems sink below the waves.

So begins a story of the Tear of the Gods, the most powerful artifact known to the Temples of Midkemia. For it allows the temples to speak with their gods. Without it, they are lost for a decade, until another gem is formed in the distant mountains.

Squire James, William, and Jazhara, new court magician, must seek out the location of this gem, with Brother Solon, a warrior priest of Ishap, and Kendaric, the sole member of the Wreckers' Guild with the power to raise the ship. They are opposed by the minions of Sidi, servant of the Dark God, who seeks to possess the Tear for his own ends, or to destroy it, denying it to the forces of light.

This third tale in The Riftwar Legacy is a breathless race for a priceless treasure. It's a race against time, against the myriad sinister and competing evil forces desperate for the all-powerful prize, and ultimately against the fundamentals of nature, which in Midkemia can be as formidable as the Gods themselves...

Krondor: Tear of the Gods Reviews

' Epic scope...vivid imagination...a significant contribution to the growth of the field of fantasy.'
Washington Post

Raymond E. Feist was born and raised in Southern California. He was educated at the University of California, San Diego, where he graduated with honours in Communication Arts. He is the author of the bestselling and critically acclaimed Riftwar Saga (Magician, Silverthorn, and A Darkness at Sethanon), Prince of the Blood, Faerie Tale and The King's Buccaneer. He is co-author (with Janny Wurts) of Daughter of the Empire, Servant of the Empire and Mistress of the Empire.
The Serpent War Saga (Shadow of a Dark Queen, Rise of a Merchant Prince, Rage of a Demon King and Shards of a Broken Crown) has continued his phenomenal success, and his epic new Riftwar series includes bestsellers Krondor: The Betrayal, Krondor: The Assassins and Krondor: Tear of the Gods.

GOR001391841
Krondor: Tear of the Gods (The Riftwar Legacy, Book 3) by Raymond E. Feist
Raymond E. Feist
The Riftwar Legacy
Used - Very Good
Hardback
HarperCollins Publishers
2000-11-20
384
0002246805
9780002246804
N/A
Book picture is for illustrative purposes only, actual binding, cover or edition may vary.
This is a used book - there is no escaping the fact it has been read by someone else and it will show signs of wear and previous use. Overall we expect it to be in very good condition, but if you are not entirely satisfied please get in touch with us.