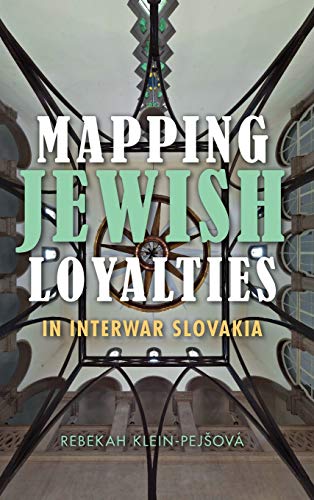 In the aftermath of World War I, the largely Hungarian-speaking Jews in Slovakia faced the challenge of reorienting their political loyalties from defeated Hungary to newly established Czechoslovakia. Rebekah Klein-Pejsova examines the challenges Slovak Jews faced as government officials, demographers, and police investigators continuously tested their loyalty. Focusing on "Jewish nationality" as a category of national identity, Klein-Pejsova shows how Jews recast themselves as loyal citizens of Czechoslovakia. Mapping Jewish Loyalties in Interwar Slovakia traces how the interwar state saw and understood minority loyalty and underscores how loyalty preceded identity in the redrawn map of east central Europe.

"After WW I, former Hungarian territory became part of the newly established state of Czechoslovakia. Jews who had lived under Hungarian rule faced the problem of status and identity in a new state... The overall picture the author presents is skillfully balanced by effective individualized treatments of individuals and events.... Recommended."

"This book makes a crucial contribution to the question of minority loyalties in Central Europe in the first half of the twentieth century. It points to a dramatic divergence of the constructions of loyalties between the majority and minority populations."

"Rebekah Klein-Pejsova's well-researched volume focuses on Slovakia between the two world wars, critically examining the position of Jews between the demise of Austria-Hungary and the proclamation of formally independent-but in reality, collaborationist-Slovakia."

"Klein-Pejsova has contributed a succinct and sophisticated profile of an understudied community, one that can help us understand the impossible dynamic faced by all Jews who lived among multiple nationalities with competing national claims."

GOR009952194
Mapping Jewish Loyalties in Interwar Slovakia by Rebekah Klein-Pejsova
Rebekah Klein-Pejsova
The Modern Jewish Experience
Used - Very Good
Hardback
Indiana University Press
2015-02-12
232
0253015545
9780253015549
N/A
Book picture is for illustrative purposes only, actual binding, cover or edition may vary.
This is a used book - there is no escaping the fact it has been read by someone else and it will show signs of wear and previous use. Overall we expect it to be in very good condition, but if you are not entirely satisfied please get in touch with us.