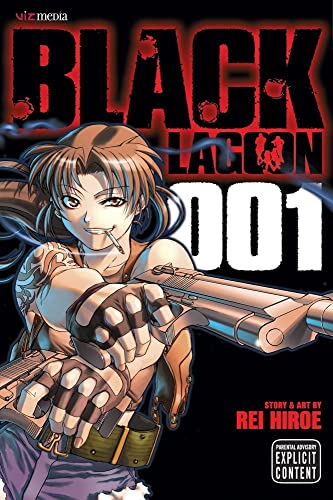 Used Price
£5.49
New RRP £8.99
Free Shipping in the UK
Volume 1 of Black Lagoon, the manga about the baddest soldiers of fortune ever to hit the high seas.
Very Good

Lock 'n' load with the baddest soldiers of fortune ever to hit the high seas of Southeast Asia! Aboard their World War II era torpedo boat, the Black Lagoon, Dutch the Boss, Benny the Mechanic, Revy Two Hand, and Rock, the salary-man from Japan, deliver anything, anywhere. In the dangerous underworld of the Russian Mafia, Chinese Triads, Colombian drug cartels, crazed assassins, and ruthless mercenaries, it's hard to know who to trust. But if you've got a delivery to make, and you don't mind a little property damage along the way, you can count on the crew of the Black Lagoon!

Rokur Okajima is just an average Japanese salaryman, living an average life. But when he's taken hostage by the crew of the Black Lagoon, Rokur finds himself thrown headfirst into a deadly world of outlawed heroes, brutal villains, and blazing gunfights. Where he ends up is anyone's guess, but one thing is for certain - he's in for a wild ride!

Rei Hiroe debuted as a mangaka in 1993. Since then, he has been an active illustrator and dojinshi and has created many titles released through the dojin community. His most recent work, Black Lagoon, is a huge hit and is serialized in the monthly magazine Sunday GX. The Black Lagoon animated TV series has also reached blockbuster status.

GOR002152675
Black Lagoon, Vol. 1 by Rei Hiroe
Rei Hiroe
Black Lagoon
Used - Very Good
Paperback
Viz Media, Subs. of Shogakukan Inc
2008-08-09
216
142151382X
9781421513829
N/A
Book picture is for illustrative purposes only, actual binding, cover or edition may vary.
This is a used book - there is no escaping the fact it has been read by someone else and it will show signs of wear and previous use. Overall we expect it to be in very good condition, but if you are not entirely satisfied please get in touch with us.