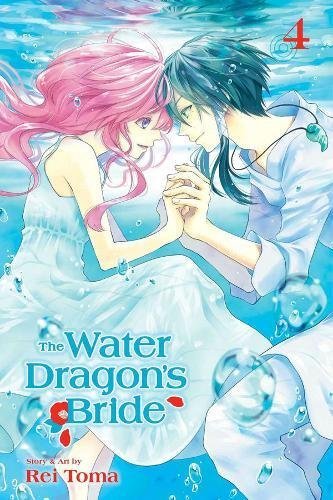 Used Price
£4.99
New RRP £6.99
Free Shipping in the UK
A modern-day girl gets whisked away to a strange land where she is sacrificed to a water dragon god!
Reviews:
Trustpilot
Very Good

A modern-day girl gets whisked away to a strange land where she is sacrificed to a water dragon god!

In the blink of an eye, a modern-day girl named Asahi is whisked away from her warm and happy home and stranded in a strange and mysterious world where she meets a water dragon god!

Because the water dragon god wants to interact with Asahi more, he descends to the village in the guise of a human. Asahi's friend Subaru has mixed feelings about this, but he joins them on a journey to the capital. How will their adventures there change their fate?

Rei Toma has been drawing since childhood, but she only began drawing manga because of her graduation project in design school. When she drew a short-story manga, Help Me, Dentist, for the first time, it attracted a publisher's attention and she made her debut right away. Her magnificent art style became popular, and after she debuted as a manga artist, she became known as an illustrator for novels and video game character designs. Her current manga series, Dawn of the Arcana, is her first long-running manga series, and it has been a hit in Japan, selling over a million copies.

GOR010294479
The Water Dragon's Bride, Vol. 4 by Rei Toma
Rei Toma
The Water Dragon's Bride
Used - Very Good
Paperback
Viz Media, Subs. of Shogakukan Inc
2018-02-08
192
1421595079
9781421595078
N/A
Book picture is for illustrative purposes only, actual binding, cover or edition may vary.
This is a used book - there is no escaping the fact it has been read by someone else and it will show signs of wear and previous use. Overall we expect it to be in very good condition, but if you are not entirely satisfied please get in touch with us.