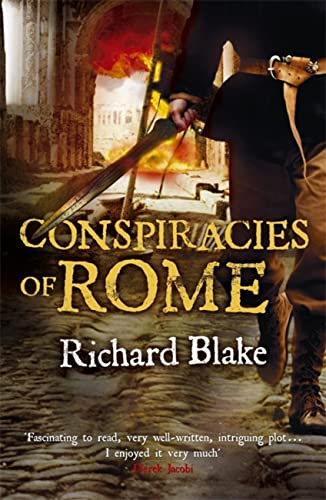 Perfect for readers of Simon Scarrow and Ben Kane, Conspiracies of Rome is the thrilling first book in the new seven-part DEATH OF ROME SAGA.

Rome, 609 AD.
Empire is a fading memory. Repeatedly fought over and plundered, the City is falling into ruins. Killers prowl by night. Far off, in Constantinople, the Emperor has other concerns as The Church is beginning to flex its own imperial muscle.

Enter Aelric of England: young and beautiful, sexually uninhibited, heroic, if ruthlessly violent - and hungry for the learning of a world that is dying around him.

A deadly brawl outside Rome sucks him straight into the high politics of Empire. Soon, Aelric is involved in a race against time to find answers before he ends up as just another corpse in the gutter.

Fascinating to read, very well written, an intriguing plot and I enjoyed it very much. -- Derek Jacobi * star of I, Claudius and Gladiator *
The best historical novel I have ever read. -- L. Neil Smith
I can't resist recommending this first volume of a promised trilogy. Set during the last pangs of Imperial Rome, with a vivid account of the machinations of the early Church, it is well-informed, atmospheric and beautifully written. * Literary Review *
An enjoyable read. * Historical Novel Society *
Richard Blake is a lecturer, historian, broadcaster and writer who lives in Kent.
GOR001111589
9780340951132
0340951133
Conspiracies of Rome (Death of Rome Saga Book One) by Richard Blake
Richard Blake
Used - Very Good
Paperback
Hodder & Stoughton General Division
2009-01-01
368
N/A
Book picture is for illustrative purposes only, actual binding, cover or edition may vary.
This is a used book - there is no escaping the fact it has been read by someone else and it will show signs of wear and previous use. Overall we expect it to be in very good condition, but if you are not entirely satisfied please get in touch with us
Trustpilot