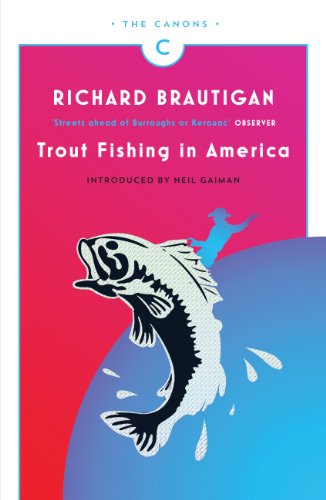 Richard Brautigan's wonderfully zany, hilarious episodic novel set amongst the rural waterways of America. Here's a journey that begins at the foot of the Benjamin Franklin statue in San Francisco's Washington Square, wanders through the wonders of America's rural waterways and ends, inevitably, with mayonnaise. With pure inventiveness and free-wheeling energy, the counterpoint to all those angry Beatniks, Brautigan tells the story of rural America, and the hunt for a bit of trout fishing. Funny, wild and sweet, Trout Fishing in America is an incomparable guidebook to the delights of exploration - of a country and a mind.

Streets ahead of Burroughs or Kerouac * * Observer * *
A book infused with a bucolic surrealism and mournful psychedelia that has very little to do with trout fishing and a lot to do with the lamenting of a passing pastoral America. An instant cult classic * * Financial Times * *
Delicate, fantastic and very funny -- Malcolm Bradbury
He writes with a kind of free-wheeling, zany magic * * Guardian * *
A master of American black absurdism * * Financial Times * *

Richard Brautigan was born in Tacoma, Washington where he spent much of his youth, before moving to San Francisco where he became involved with other writers in the Beat Movement. During the Sixties he became one of the most prolific and prominent members of the counter-cultural movement, and wrote some of his most famous novels including Trout Fishing in America, Sombrero Fallout and A Confederate General from Big Sur. He was found dead in 1984, aged 49, beside a bottle of alcohol and a .44 calibre gun. His daughter, Ianthe Brautigan, has written a biography of her father, You Can't Catch Death.

GOR006579086
Trout Fishing in America by Richard Brautigan
Richard Brautigan
Canons
Used - Very Good
Paperback
Canongate Books Ltd
2014-09-18
144
1782113800
9781782113805
N/A
Book picture is for illustrative purposes only, actual binding, cover or edition may vary.
This is a used book - there is no escaping the fact it has been read by someone else and it will show signs of wear and previous use. Overall we expect it to be in very good condition, but if you are not entirely satisfied please get in touch with us.