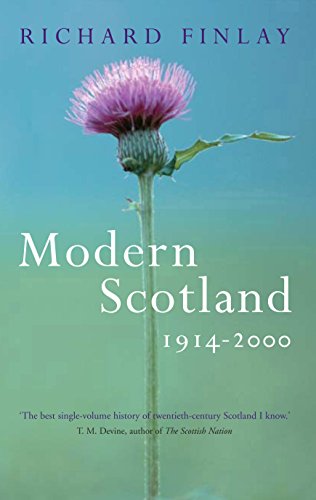 In Stock
£18.99
A history of the Scottish people in the twentieth century - from the First World War, which radically altered the political, social and economic landscape of the country, to the creation of the Scottish parliament in 2000.
Very Good
Only 1 left

A major history of the Scottish people in the twentieth century - from the First World War, which radically altered the political, social and economic landscape of the country, to the creation of the Scottish parliament in 2000. Richard Finlay's comprehensive narrative and analysis consider the major themes of the century - whether working-class militancy or the (decline and) rise of Scottish nationalism, poverty or social reconstruction, the 'new Scots' from Asia or land problems in the Highlands, the Scottish cultural renaissance or popular culture. But it also in telling detail shows how these themes were played out in particular communities and affected the lives of individuals. From the women who worked in munitions factories to the children in the school playground, from the Tory faithful of Dumfries to the union men of Linwood, from the cinema-goers of 1930s Aberdeen to crofters of Knoydart who recently succeeded in buying their land, Richard Finlay gives a vivid picture of contemporary Scotland, and the people who have shaped it.

The best single-volume history of twentieth-century Scotland I know. It provides fresh perspectives on old issues while engaging with such new topics as gender, the drugs culture and popular music. -- T. M. Devine, author of The Scottish Nation
Compelling ... Finlay's thesis is difficult to fault. * Sunday Herald *
Hurrah for Richard Finlay ... a serious intellectual historian who has so far escaped the desire to become a media harlot like some of his contemporaries. His ideas are concise and his prose is sharp ... like all the best historians, Finlay's book is a narrative with a plot, rather than a jumble of opinionated facts ... This is a highly readable and thought-provoking work. * Scotsman *
A well rounded history of twentieth century Scottish life. * Contemporary Review *

Richard J. Finlay is Director of the Research Centre in Scottish History at the University of Strathclyde. His previous books include Scotland: The Struggle for a Nation (2000).