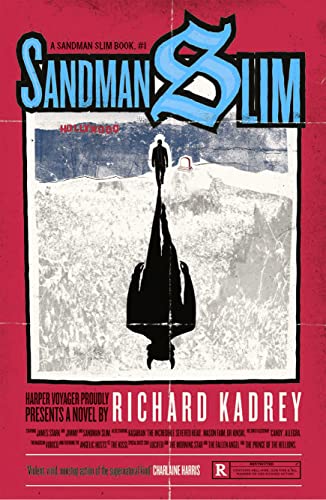 Supernatural fantasy has a new antihero in Sandman Slim, star of this gripping, gritty new series by Richard Kadrey

Supernatural fantasy has a new antihero in Sandman Slim, star of this gripping, gritty new series by Richard Kadrey

Life sucks and then you die. Or, if you're James Stark, you spend eleven years in Hell as a hitman before finally escaping, only to land back in the hell-on-earth that is Los Angeles.

Now Stark's back, and ready for revenge. And absolution, and maybe even love. But when his first stop saddles him with an abusive talking head, Stark discovers that the road to absolution and revenge is much longer than you'd expect, and both Heaven and Hell have their own ideas for his future.

Darkly twisted, irreverent, and completely hilarious, Sandman Slim is the breakthrough novel by an acclaimed author.

"If Simon R. Green wrote an episode of Dog the Bounty Hunter, it would read much like Sandman Slim - violent, vivid, non-stop action of the supernatural kind. I couldn't put it down." Charlaine Harris

"The most hard-boiled piece of supernatural fiction I've ever had the pleasure of reading. ... all confident and energetic and fresh and angry. I loved this book and all its screwed-up people." Cory Doctorow, author of Little Brother

"Paced like greased lightning (watch out for friction burns on your turning finger), blend the movie-ish delights of tough guy noir and such smart-mouthgore-fests as "Reanimator" and "Army of Darkness", seasoned by soupcons of Gaimanian romanticism and Koontzian sentiment." Booklist

"Nicotine and octane in equal parts might come close to the high-energy buzz from Richard Kadrey's Sandman Slim. Crisp world building, recognizable and fully-realized characters, and a refreshingly unique storytelling style make for an absorbing read. Sandman Slim is my kind of hero." Kim Harrison

Richard Kadrey is the New York Times bestselling author of the Sandman Slim supernatural noir books. Sandman Slim was included in Amazon's `100 Science Fiction & Fantasy Books to Read in a Lifetime', and is in development as a feature film. His other books include Hollywood Dead, The Everything Box, Metrophage, and Butcher Bird, and he also writes comics and screenplays. He lives in San Francisco.

GOR004814967
Sandman Slim (Sandman Slim, Book 1) by Richard Kadrey
Richard Kadrey
Sandman Slim
Used - Very Good
Paperback
HarperCollins Publishers
2013-06-20
390
0007445989
9780007445981
N/A
Book picture is for illustrative purposes only, actual binding, cover or edition may vary.
This is a used book - there is no escaping the fact it has been read by someone else and it will show signs of wear and previous use. Overall we expect it to be in very good condition, but if you are not entirely satisfied please get in touch with us.