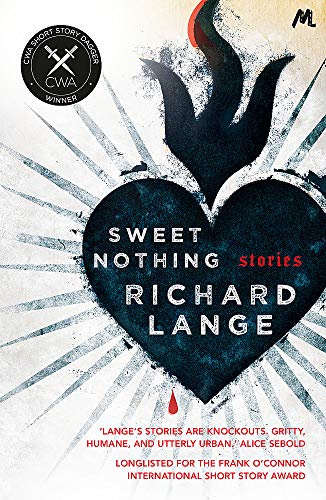 Sweet Nothing
by Richard Lange

In Stock
£5.99
Crimes, drama, hard choices and the dark side of sunny California feature in this awardwinning short story collection from critically acclaimed author Richard Lange.
Good
Only 1 left

Sweet Nothing: Stories by Richard Lange

Every life is uncertain. Every choice is a danger.

Set on the dark side of Los Angeles, this is a masterful collection of edge-of-your-seat tales: a prison guard must protect an inmate being tried for heinous crimes. A father and son set out to rescue a young couple trapped during a wildfire after they cross the border. An ex-con trying to make good as a security guard stumbles onto a burglary plot. A young father must submit to blackmail to protect the fragile life he's built.

Sweet Nothing is an intense and gripping journey through real lives with big problems, from one of America's great short story writers.

Lange's stories are knockouts. Gritty, humane, and utterly urban. -- Alice Sebold
Lange's morality tales are not that far removed from the classic stories of O. Henry and Guy de Maupassant. With a distinctive style, Lange makes his downbeat tales of the underclass quirkily entertaining. * Kirkus *
Richard Lange's stories are a revelation. He writes of the disaffections and bewilderments of ordinary lives with as keen an anger and searing lyricism as anybody out there today. He is Raymond Carver reborn in a hard cityscape. Read him and be amazed. -- T.C. Boyle
The kind of book you'll want to savour * Pittsburgh Post Gazette *
A natural-born storyteller -- Ron Rash
What makes this collection a wonderful read is it's only marginally akin to anything else. Swift, gut wrenching, and sometimes cleverly disarming fiction by a master -- Joe R. Lansdale
The man just keeps getting better. The stories in Sweet Nothing traffic in the vagaries of the human heart, those wants and needs that push us down dark paths. His vision is steely-eyed, yet you sense that Lange loves his characters - even the worst of them - and that compassion sharpens your own emotional investment. -- Craig Davidson

Richard Lange is the author of the short story collection Dead Boys and the novel This Wicked World and ANGEL BABY. His stories have appeared in the Sun, the Iowa Review and Best American Mystery Sstories, and as part of the Atlantic Monthly's Fiction for Kindle series. He was the 2008 recipient of the Rosenthal Family Foundation Award for Literature from the American Academy of Arts and Letters and was awarded a Guggenheim Fellowship in 2009. He lives in Los Angeles.