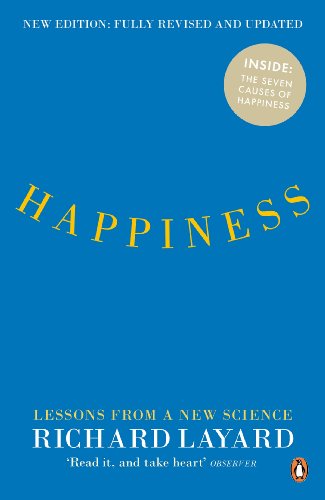 In Stock
6,99 £
Shows that there is a paradox at the heart of our lives. This title describes that most people want more income and yet as societies become richer, they do not become happier.
Very Good Well Read
6 in stock

In this new edition of his landmark book, Richard Layard shows that there is a paradox at the heart of our lives. Most people want more income. Yet as societies become richer, they do not become happier. This is not just anecdotally true, it is the story told by countless pieces of scientific research. We now have sophisticated ways of measuring how happy people are, and all the evidence shows that on average people have grown no happier in the last fifty years, even as average incomes have more than doubled. In fact, the First World has more depression, more alcoholism and more crime than fifty years ago. This paradox is true of Britain, the United States, continental Europe, and Japan. What is going on? Now fully revised and updated to include developments since first publication, Layard answers his critics in what is still the key book in 'happiness studies'.

Unorthodox, devastatingly straightforward and more provocative of actual thought than 90% of books said to be "thought-provoking". If happiness isn't a political issue, what's the point of politics? -- Andrew Marr
A remarkable book ... which effectively trashes the claim of economics to guide policy for a good society ... read it, and take heart -- Simon Caulkin * Observer *
Fascinating ... argues that we should make happiness, not growth, the object of our economic policies -- John Kay * Financial Times *

Richard Layard is a leading economist who believes that the happiness of society does not necessarily equate to its income. He is best known for his work on unemployment and inequality, whihc provided the intellectual basis for Britain's improved unemployment policies. He founded the Centre for Economic Performance at the London School of Economics, and since 2000 he has been a member of the House of Lords. His research into the subject of happiness brings together findings from such diverse areas as psychology, neuroscience, economics, sociology and philosophy.

GOR003149034
Happiness: Lessons from a New Science (Second Edition) by Richard Layard
Richard Layard
Used - Very Good
Paperback
Penguin Books Ltd
2011-03-02
384
0241952794
9780241952795
N/A
Book picture is for illustrative purposes only, actual binding, cover or edition may vary.
This is a used book - there is no escaping the fact it has been read by someone else and it will show signs of wear and previous use. Overall we expect it to be in very good condition, but if you are not entirely satisfied please get in touch with us.