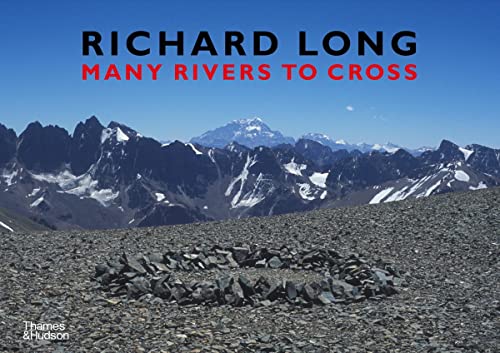 A comprehensive overview of Richard Long's career, selected by the artist himself and spanning his career from the late 1960s to today.

Richard Long has been at the forefront of land art for more than half a century. A pioneer of conceptual practices in the 1960s, his expanded approach to sculpture has consistently taken the medium out of the studio into the natural world and around the globe, using time, space, distance, navigation, perception, the elements and the geological forces that have shaped the landscape around us as both his tools and his vocabulary.

Many Rivers to Cross is a thorough overview of Long's career, selected by the artist himself and spanning the late 1960s to the present day. It covers his practice in all its forms - walks, photographs, text works, large installations, mud works and drawings, including some early unpublished works as well as many seminal and celebrated projects.

A number of short 'back stories' written by Long not only provide insight into the context and creation of key works, but also evoke the sense of freedom and adventure of an epic journey across foreign landscapes. Texts include a recent conversation between Long and internationally acclaimed composer and musician Nitin Sawhney; a dialogue about the recreation of Muddy Water Circle (1994) at Frieze Masters in London with Lisson Gallery in 2013; and a discussion with curator Alkistis Dimaki on the occasion of the presentation of Athens Slate Line at the Acropolis, Athens, in summer 2020. The book also includes documentation of works presented internationally in museums and galleries.

Using earth, rocks, sticks and other natural materials and forces ranging from water and gravity to clouds and constellations of stars, over the course of his distinguished career Long has represented the primal relationship between humankind, art and the landscape. In a modern, post-industrial, digital world, his poetic and often profound practice is a poignant reminder of the origins of life, of human development and civilization, and of the fundamental, primordial drive to create.
Sir Richard Long CBE is one of Britain's foremost sculptors and land artists. Short-listed four times for the Turner Prize, he won the award in 1989 for White Water Line. He was elected to the Royal Academy of Arts in 2001 and for more than fifty years his work has been exhibited at major galleries throughout the world. Richard Long lives and works in Bristol, the city in which he was born.
NPB9780500971208
9780500971208
050097120X
Richard Long: Many Rivers to Cross by Richard Long
Richard Long
New
Hardback
Thames & Hudson Ltd
20210923
400
N/A
Book picture is for illustrative purposes only, actual binding, cover or edition may vary.
This is a new book - be the first to read this copy. With untouched pages and a perfect binding, your brand new copy is ready to be opened for the first time
Trustpilot