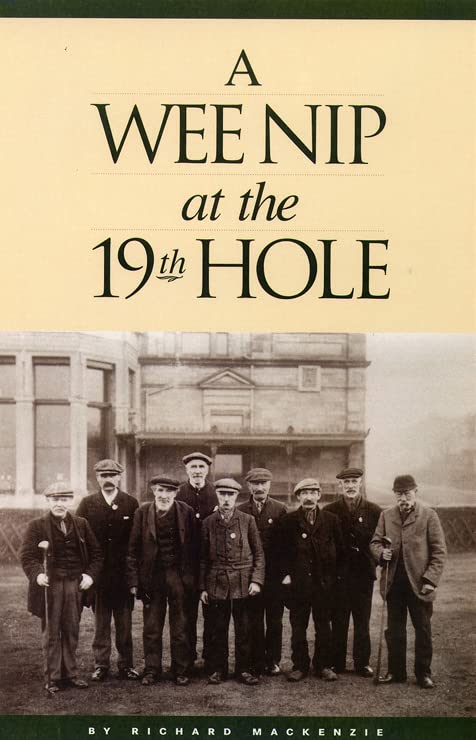 A Wee Nip at the 19th Hole
by Richard MacKenzie

A masterful celebration of one of golf's great time-honoured traditions - the St Andrews caddie - written by the Caddie Manager at the historic St Andrews Old Course and a former caddie himself.

A Wee Nip at the 19th Hole Summary

A Wee Nip at the 19th Hole by Richard MacKenzie

A masterful celebration of one of golf's great time-honoured traditions - the St Andrews caddie - written by the Caddie Manager at the historic St Andrews Old Course and a former caddie himself.

For over 200 years caddies have been walking around St Andrews, the most famous piece of golfing land in the world, advising players of vastly different abilities not only on which club to take but also on the type of shot required and, most importantly on the Old Course, exactly the line on which to play.

In his evocative and fascinating book, Richard Mackenzie reminds us how caddies first came to St Andrews, the way in which they have added so much to the folklore of the links and the great contribution which they have made and continue to make to the game of golf for those who visit `The Home of Golf'.

It's a remarkable treasure trove of intriguing insights into the social history of caddies interspersed with timeless anecdotes and vivid feature articles.

With legendary characters such as `Trap Door' Johnson, Stumpie Eye and `Poot' Chisholm (`With good porridge and a wee nip, you're all right for life'), A Wee Nip takes the reader back to the roots of the game, reliving a host of cherished memories along the way.

A Wee Nip at the 19th Hole Reviews

Richard Mackenzie began to hone his skills as a caddie at St Andrews in the early 80s, soon becoming good enough to work the 1984 Open Championship at St Andrews where he carried for 5-time winner Peter Thomson. Since then he has worked seven Opens and numerous European and US Tours, before becoming Caddie Manager at St Andrews in 1992. In the 1994 Alfred Dunhill Cup he caddied for Canadian Rick Gibson in that country's win in the final against the USA on the Old Course

GOR002658616
A Wee Nip at the 19th Hole by Richard MacKenzie
Richard MacKenzie
Used - Very Good
Hardback
HarperCollins Publishers
1998-03-16
144
0002188473
9780002188470
N/A
Book picture is for illustrative purposes only, actual binding, cover or edition may vary.
This is a used book - there is no escaping the fact it has been read by someone else and it will show signs of wear and previous use. Overall we expect it to be in very good condition, but if you are not entirely satisfied please get in touch with us.