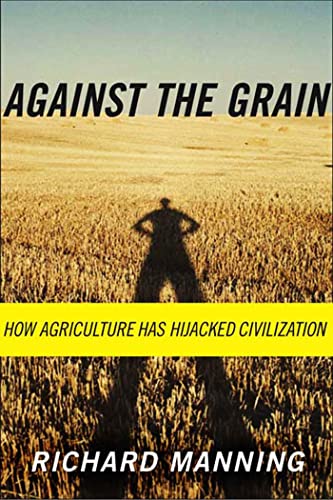 Against the Grain
by Richard Manning

In Stock
£5.49
Offers a revisionist view of recent human evolution, beginning with the vast increase in brain size that set us apart from our primate relatives and brought an accompanying increase in our need for nourishment. Eventually we embarked upon the agricultural experiment that has been part of our history for the past 10000 years.
Good
Only 1 left

Against the Grain Summary

Against the Grain: How Agriculture Has Hijacked Civilization by Richard Manning

In this provocative, wide-ranging book, Against the Grain, Richard Manning offers a dramatically revisionist view of recent human evolution, beginning with the vast increase in brain size that set us apart from our primate relatives and brought an accompanying increase in our need for nourishment. For 290,000 years, we managed to meet that need as hunter-gatherers, a state in which Manning believes we were at our most human: at our smartest, strongest, most sensually alive. But our reliance on food made a secure supply deeply attractive, and eventually we embarked upon the agricultural experiment that has been the history of our past 10,000 years.

The evolutionary road is littered with failed experiments, however, and Manning suggests that agriculture as we have practiced it runs against both our grain and nature's. Drawing on the work of anthropologists, biologists, archaeologists, and philosophers, along with his own travels, he argues that not only our ecological ills-overpopulation, erosion, pollution-but our social and emotional malaise are rooted in the devil's bargain we made in our not-so-distant past. And he offers personal, achievable ways we might re-contour the path we have taken to resurrect what is most sustainable and sustaining in our own nature and the planet's.

Against the Grain Reviews

"An exhilarating and provocative questioning of our most ingrained beliefs about how we get our food and why. A must read for anyone concerned about the intimate couplings of man, plant, and beast." --Betty Fussell, author of The Story of Corn

"Against the Grain is a brilliant, provocative book. Where environmental journalism is concerned, Richard Manning is at the head of the class." --Larry McMurtry

"Richard Manning's important new book is radical in the very best sense, taking agriculture by the roots to make a bracing case that unless we manage to tame this environmental juggernaut it will ruin our health and the health of the planet." --Michael Pollan

"Against The Grain is both fascinating and frightening. But Manning reports more than bad news--he also suggests solutions. This is an important book. Let's hope it's widely read, and that its urgent message reaches our leaders. As it will, if we insist loudly enough." --William Kittredge, author of The Nature of Generosity

"Against the Grain is an important book. It effectively upends the assumption that domesticating agriculture thousands of years ago improved lives then and now. Instead agriculture domesticated people. Manning brings the concentration of the hunter-gatherer to his subject. The writing is taut and powerful. He shows how with agriculture diets deteriorated, workload increased, and social inequities soared. We have become distanced from our very natures as sensual human beings. Agriculture's quest is products. As grain production rose, it required more outlets, so we eat what needs to be sold. Manning points the way to restored health for humanity and for ecosystems: a counter-agriculture of food rather than food products. Diversify what gets planted, raised, and eaten to go against the grain." --Deborah Popper, geographer at City University of New York's College of Staten Island

Richard Manning is the author of Last Stand, A Good House, Grassland, One Round River, and Food's Frontier. He lives in Montana.

GOR010301128
Against the Grain: How Agriculture Has Hijacked Civilization by Richard Manning
Richard Manning
Used - Good
Paperback
North Point Press
2005-05-09
240
0865477132
9780865477131
N/A
Book picture is for illustrative purposes only, actual binding, cover or edition may vary.
The book has been read but remains in clean condition. All pages are intact and the cover is intact. Some minor wear to the spine.