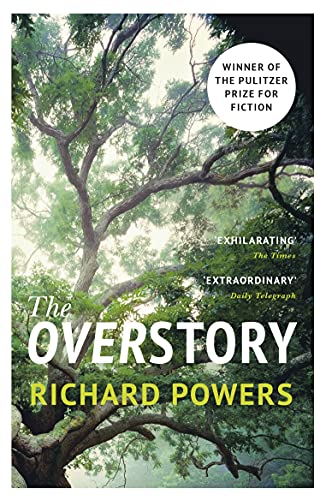 The Overstory
by Richard Powers

The Overstory: Winner of the 2019 Pulitzer Prize for Fiction by Richard Powers

WINNER OF THE PULITZER PRIZE FOR FICTION 2019

A wondrous, exhilarating novel about nine strangers brought together by an unfolding natural catastrophe.

'Really, just one of the best novels, period' Ann Patchett

An artist inherits a hundred years of photographic portraits, all of the same doomed American chestnut. A hard-partying undergraduate in the late 1980s electrocutes herself, dies, and is sent back into life by creatures of air and light. A hearing- and speech-impaired scientist discovers that trees are communicating with one another. An Air Force crewmember in the Vietnam War is shot out of the sky, then saved by falling into a banyan.

This is the story of these and five other strangers, each summoned in different ways by the natural world, who are brought together in a last stand to save it from catastrophe.

'It's a masterpiece' Tim Winton

Autumn makes me think of leaves, which makes me think of trees, which makes me think of The Overstory, the best novel ever written about trees, and really, just one of the best novels, period. -- Ann Patchett
[The Overstory is] the best book I've read in ten years. It's a remarkable piece of literature, and the moment it speaks to is climate change. So, for me, it's a lodestone. It's a mind-opening fiction, and it connects us all in a very positive way to the things that we have to do if we want to regain our planet. We've got lots and lots of trees where we live in Scotland. If I'm feeling unwell or unsettled in any way, I always go and sit with a tree or walk through the trees, and that's incredibly healing and helpful -- Emma Thompson * New York Times *
An extraordinary novel ... It's an astonishing performance ...He's incredibly good at describing trees, at turning the science into poetry ...The book is full of ideas ... Like Moby-Dick, The Overstory leaves you with a slightly adjusted frame of reference ... Some of what was happening to his characters passed into my conscience, like alcohol into the bloodstream, and left a feeling behind of grief or guilt, even after I put it down. Which is one test of the quality of a novel. * Guardian *
The time is ripe for a big novel that tells us as much about trees as Moby-Dick does about whales ... The Overstory is that novel and it is very nearly a masterpiece ... The encyclopaedic powers of Powers extend from the sciences to the literary classics. On almost every page of The Overstory you will find sentences that combine precision and vision. You will learn new facts about trees ... [An] exhilarating read. * The Times *
[The Overstory] whirls together so many characters, so much research and such a jostle of intersecting ideas that, at times, it feels like a landbound companion to Moby-Dick's digressional and obsessive whale tale ... One of the most thoughtful and involving novels I've read for years ... This long book is astonishingly light on its feet, and its borrowings from real research are conducted with verve ... The propulsive style and the enthusiastic reverence of Powers's writing about nature keep it whizzing through any amount of linked observations on literary criticism, political science and statistical analysis. It's an extraordinary novel, alert to the large ideas and humanely generous to the small ones; in an age of cramped autofictions and self-scrutinising miniatures, it blossoms. * Daily Telegraph *
Big brainy books bristling with formidable versatility have been Powers's speciality since he launched his highly idiosyncratic fictional career ... The Overstory is a hugely ambitious eco-fable ... An immense and intense homage to the arboreal world, the book is alive with riveting data, cogent reasoning and urgent argument ... [Pages] teem with knowledge and gleam with aesthetic appeal. Angry energy pulses through scenes ... Valiant. * Sunday Times *
During these weeks of being shut-in, I have revisited The Overstory by Richard Powers. It's a novel about the natural world - trees specifically - and our power as human beings to destroy it or redeem it. It reminds me that we are all connected and that there is still time to make things right -- Tayari Jones, author of An American Marriage
I have thought about The Overstory ever since reading it last year... For me, what was so radical and exciting about this novel was the fact that the trees are probably more important than the human beings who trundle around them causing chaos. It was the first "eco-lit" novel I've read that made me stop and truly realise how sophisticated trees are, how magisterially brilliant. And, in a world where finally, collectively, we are acknowledging the threat of climate crisis, it reminded me of how important they are to the planet's survival * Guardian *
No less a writer than Margaret Atwood has said of Richard Powers that "it's not possible for him to write an uninteresting book". On the evidence of The Overstory, he is continuing a remarkable run ... This is a mighty, at times even monolithic, work that combines the multi-narrative approach of David Mitchell's Cloud Atlas with a paean to the grandeur and wonder of trees that elegantly sidesteps pretension and overambition. Early comparisons to Moby-Dick are unfairly lofty, but this fine book can stand on its own ... Written with a freshness that belies the well-worn subject matter ... As befits a book that spans centuries, there is a richness and allusiveness to the prose that reaches back as far as Thoreau's Walden, and Emerson is an acknowledged touchstone. The Overstory is high-minded but never precious ... [A] majestic redwood of a novel ... It is fitting that it ends with a message of hope. As with Larkin, a belief that humanity is capable of redeeming itself and beginning "afresh, afresh, afresh". * Observer *
His monumental novel The Overstory accomplishes what few living writers from either camp, art or science, could attempt ... The Overstory is a delightfully choreographed, ultimately breathtaking hoodwink ... The opener is a gorgeous family saga with the texture of a Ken Burns documentary ... we're in the hands of Richard Powers, winner of a genius grant, a storyteller of such grand scope that Margaret Atwood was moved to ask: "If Powers were an American writer of the 19th century, which writer would he be? He'd probably be the Herman Melville of Moby Dick." His picture really is that big ... Trees will bring these small lives together into large acts of war, love, loyalty and betrayal ... The descriptions of this deeply animate place, including a thunderstorm as experienced from 300 feet up, stand with any prose I've ever read ... The science in this novel ranges from fun fact to mind-blowing, brought to us by characters ... who are sweet or funny or maddening in all the relatable ways ... This is a gigantic fable of genuine truths held together by a connective tissue of tender exchange between fictional friend, lovers, parents and children. * New York Times Book Review *

Richard Powers is the author of twelve novels, including Orfeo (which was longlisted for the Man Booker Prize), The Echo Maker, The Time of Our Singing, Galatea 2.2 and Plowing the Dark. He is the recipient of a MacArthur grant and the National Book Award, and has been a Pulitzer Prize and four-time NBCC finalist. He lives in the foothills of the Great Smoky Mountains.

GOR009920320
The Overstory: Winner of the 2019 Pulitzer Prize for Fiction by Richard Powers
Richard Powers
Used - Like New
Paperback
Vintage Publishing
2019-04-11
640
1784708240
9781784708245
N/A
Book picture is for illustrative purposes only, actual binding, cover or edition may vary.
The book has been read, but looks new. The book cover has no visible wear, and the dust jacket is included if applicable. No missing or damaged pages, no tears, possible very minimal creasing, no underlining or highlighting of text, and no writing in the margins.