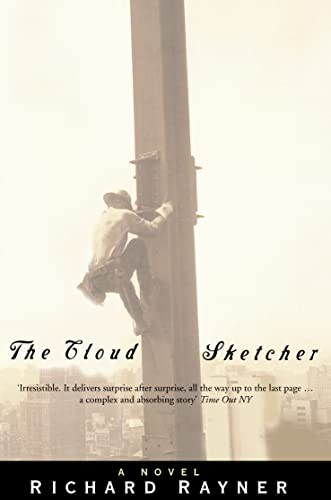 The Cloud Sketcher
by Richard Rayner

Spanning two continents and three decades, The Cloud Sketcher is an epic tale of love, murder and revenge.

The Cloud Sketcher by Richard Rayner

Spanning two continents and three decades, The Cloud Sketcher is an epic tale of love, murder and revenge.

Police stand ready to make an arrest as the Ile de France liner docks at New York Harbour in 1929. The passengers assume that it is notorious bootlegger Paul Mantilini who is to be taken away. But Mantilini walks down the gangplank a free man and instead it is Esko Vaananen the police arrest - a celebrated architect, and by all accounts a shy and mild-mannered young man.

Born a peasant in rural Finland at the turn of the century, Esko, the son of an outcast Bolshevik, dreamed of skyscrapers and of a beautiful and tragic Russian aristocrat named Katerina. His entire life has been spent pursuing and protecting these twin passions, no matter how great the cost. It is a journey that has led him into the battlefields of the Bolshevik revolution and the jazz-age nightclubs of New York City, and finally, to strike a Faustian bargain with a ruthless gangster - all in pursuit of artistic perfection and impossible, unattainable love. And now he stands accused of murder...

A grand and unashamedly romantic literary epic, The Cloud Sketcher moves from the battle of Tampere to the incredible danger of working on `the high steel' of skyscraper shells, from Prohibition to the remarkable intersection of organized crime, finance and the arts in 1920s New York, powerfully evoking an era gone by.

`No one who opens The Cloud Sketcher will find it easy to stop reading before the last vertiginous page...Passionate and well-researched... remarkable [for] its visceral feeling for architecture... Rayner's eye is excellent.' Chicago Tribune

`Irresistible. It delivers surprise after surprise, all the way up to the last page...a complex and absorbing story.' Time Out New York

`A completely engaging read, an impressive meditation on longing and obsession that's also a searching reflection on the act of creation itself.' Jabari Asim, Washington Post

Richard Rayner was born in Bradford and now lives in Los Angeles. His previous books include the memoir The Blue Suit, and the novel L.A. without a Map - made into a movie starring David Tennant, Vinessa Shaw, Julie Delpy and Vincent Gallo in 1998 - and the literary mystery Murder Book. In addition, he writes for the New York Times, Granta, Harper's Bazaar and other publications.

GOR001216789
The Cloud Sketcher by Richard Rayner
Richard Rayner
Used - Very Good
Paperback
HarperCollins Publishers
2001-09-03
528
0007123272
9780007123278
N/A
Book picture is for illustrative purposes only, actual binding, cover or edition may vary.
This is a used book - there is no escaping the fact it has been read by someone else and it will show signs of wear and previous use. Overall we expect it to be in very good condition, but if you are not entirely satisfied please get in touch with us.