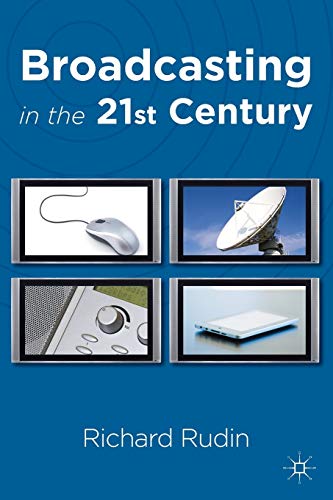 Broadcasting in the 21st Century
by Richard Rudin

In Stock
£2.69
Richard Rudin demonstrates how traditional TV and radio is being both challenged and supported by technological developments - including convergence and social media - which are eroding previous restrictions on the times and places of where broadcasting is being consumed and altering audiences' pleasures, expectations and demands.
Very Good
Only 2 left

Broadcasting in the 21st Century Summary

Broadcasting in the 21st Century by Richard Rudin

The 21st century is already seeing fundamental changes in broadcasting. No longer are audiences limited to watching or listening to television and radio at the times and places dictated by the broadcasters, or on radio or TV 'sets'. Broadcasting in the
21st Century demonstrates how 'traditional' television and radio is being both challenged and supported by technological developments, including convergence and social media. Drawing on interviews with industry personnel and featuring case
studies and research from many countries, including that from the UK, USA, China, India and South Africa, Richard Rudin explains not only the significance of these changes but also how many of the functions and pleasures of broadcasting that were established in the 20th century are being enhanced by new media. Opening with a substantial account of how broadcasting developed in the 20th century, the author goes on to explore how new media forms are changing audiences' pleasures,
expectations and demands.

Rudin's illuminating study highlights the changing relationship between audiences and broadcast output to examine a range of subjects including:
- the impact of citizens' journalism
- political coverage
- international TV formats and news output
- the continuing appeal of radio as a distinct medium
- debates over bias, truth and trust in broadcasting and broadcasters.

In addition, Broadcasting in the 21st Century addresses a range of broadcast forms and genres including the coverage of general elections, Reality TV and pirate radio.

RICHARD RUDIN is a Senior Lecturer in broadcasting and journalism at Liverpool John Moores University (UK). He has worked as a journalist, newscaster, presenter, producer and manager. He co-authored An Introduction to Journalism (2002), was a major contributor to the award-winning Encyclopedia of Radio (2004) and is the author of a number of journal articles on broadcasting. He is Chair of the International Division of the U.S.-based Broadcast Educational Association.

GOR005566243
Broadcasting in the 21st Century by Richard Rudin
Richard Rudin
Used - Very Good
Paperback
Macmillan Education UK
2011-09-13
244
023001318X
9780230013186
N/A
Book picture is for illustrative purposes only, actual binding, cover or edition may vary.
This is a used book - there is no escaping the fact it has been read by someone else and it will show signs of wear and previous use. Overall we expect it to be in very good condition, but if you are not entirely satisfied please get in touch with us.