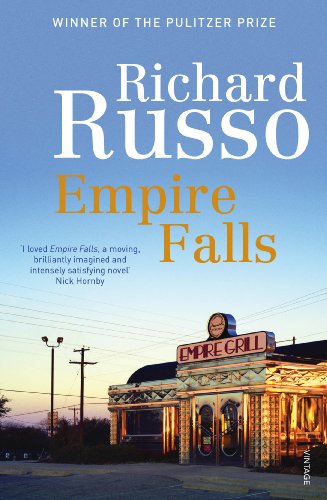 Empire Falls, Maine: once a thriving hub of industry, this small town nestles in a bend of the vast and winding Knox River, and has always been the empire of the wealthy Whiting family. She harbours a grudge against her employee Miles Groby, who runs the Whiting-owned Empire Grill, but hopes one day to own it himself.

Empire Falls, Maine: once a thriving hub of industry, this small town nestles in a bend of the vast and winding Knox River, and has always been the empire of the wealthy Whiting family. Now the last Mrs Whiting presides like a black widow spider over its declining fortunes. She harbours a grudge against her employee Miles Groby, who runs the Whiting-owned Empire Grill, but hopes one day to own it himself. Miles, gentle and hopeless, has other problems: his wife has run off with his worst customer, he frets about his adored teenage daughter, and his drunken father sponges off everyone.

As the novel builds to a shocking climax, Russo constantly surprises with characters who will disarm you, a plot with as many twists and falls as the Knox River itself, and an ending that will make the hairs stand up on the back of your neck.

I loved Richard Russo's Pulitzer-winning Empire Falls, a moving, brilliantly imagined and intensely satisfying novel about the slow death of a small town: Russo's characters are as loveable and as exasperating as family -- Nick Hornby
His natural grace as a storyteller is matched by his compassion for his characters -- John Irving
Like Anne Tyler, Russo is interested in how people rub along; in kindness and responsibility; in cutting slack without being asked. In the Empire Grill he has created a place so involving that not only can you see and smell it, but you start to feel a bit left out of the gin rummy. Russo makes an enormous job of story-telling look effortless. He is, in all the best senses of the word, a natural * Sunday Times *
Richard Russo can write like Edith Wharton leavened with a touch of David Lodge * Economist *
Russo's command of his story is unerring... He satisfies every expectation without lapsing into predictability, and the last section of the book explodes with surprises...One of the best novelists around * New York Times *

Richard Russo won the 2002 Pulitzer Prize for his fifth novel, Empire Falls. He is also the author of Mohawk, The Risk Pool, Nobody's Fool, Straight Man, Bridge of Sighs and That Old Cape Magic, as well as a collection of stories, The Whore's Child; and a memoir, On Helwig Street. His original screenplay is the basis for Rowan Atkinson's film Keeping Mum. He lives with his wife in Maine.

GOR001259189
Empire Falls by Richard Russo
Richard Russo
Used - Very Good
Paperback
Vintage Publishing
2002-04-07
496
0099422271
9780099422273
Winner of Pulitzer Prize Novel Category 2002 Winner of Pulitzer Prize for Fiction 2002
Book picture is for illustrative purposes only, actual binding, cover or edition may vary.
This is a used book - there is no escaping the fact it has been read by someone else and it will show signs of wear and previous use. Overall we expect it to be in very good condition, but if you are not entirely satisfied please get in touch with us.