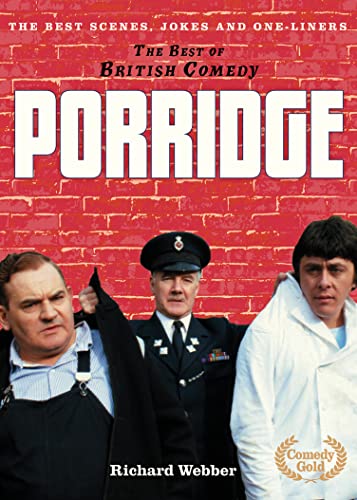 `Cheer up, could be worse. State the country's in, we could be free.'

Porridge (The Best of British Comedy) by Richard Webber

`Cheer up, could be worse. State the country's in, we could be free.'

`Doctor: I want you to fill one of those containers for me.
Fletcher (other side of the room): What, from 'ere?'

You can count the number of truly classic British sitcoms on one hand - well, perhaps two. But however many hands you use, Porridge will be one of the first programmes to register for inclusion. Undoubtedly one of the real gems, the prison-based show starring the late Ronnie Barker as the recalcitrant yet loveable rascal, Fletcher, transcends the generations; like any other classic, it remains as accessible and funny today as it did when first aired in the 1970s.

Including the pilot, transmitted a year before the first series hit the screen, twenty-one instalments were made, attracting audiences of up to 20 million. Written by those prolific scribes Dick Clement and Ian La Frenais, and brought to life by an estimable bunch of actors, headed by the great Ronnie B as Fletch, a recidivist who spent most of his adult life behind bars, the sitcom quickly attracted plaudits and became a shining example of what good situation comedy is all about.

* The History: an overview of how Porridge was born and developed
* Gags and Catchphrases: a collection of classic quotes
* Did You Know?: snippets of info about the show, cast, etc.
* Favourite scenes: the most memorable scenes in full
* A Porridge quiz

`New Faces, Old Hands'
FLETCHER
My beloved Isobel.The little woman. Well she aint so little.I said to her the other day, 'Isobel, I'll never get over you, I'll have to get up and go round.'

As a journalist and writer, Richard Webber writes regulary about TV, contributing to a host of newspapers and magazines, including TV Quick, Daily Express, Sunday Express and the Sunday Telegraph and is the author of over a dozen books celebrating classic comedy, such as The A-Z of Dad's Army, The A-Z of Only Fools and Horses, The Complete One Foot in the Grave, Are You Being Served? - 25 Years, Rising Damp - A Celebration, Porridge - The Inside Story and The Complete A-Z of Everything Carry On.

GOR000786421
Porridge (The Best of British Comedy) by Richard Webber
Richard Webber
The Best of British Comedy
Used - Very Good
Hardback
HarperCollins Publishers
2008-10-01
160
0007285299
9780007285297
N/A
Book picture is for illustrative purposes only, actual binding, cover or edition may vary.
This is a used book - there is no escaping the fact it has been read by someone else and it will show signs of wear and previous use. Overall we expect it to be in very good condition, but if you are not entirely satisfied please get in touch with us.