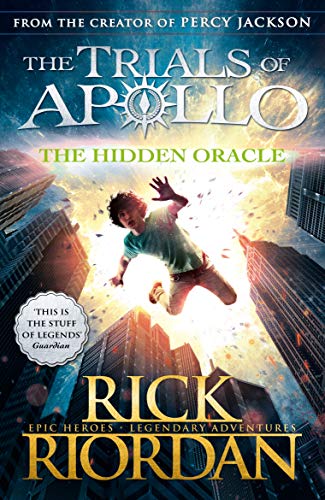 The Hidden Oracle (The Trials of Apollo Book 1) Summary

He was once an immortal God. Now, he's a teenage boy called Lester.

Apollo has angered his father Zeus for the last time.

So, how do you punish an immortal?

By making him human. Obviously.

Cast down from Olympus, he's weak, disorientated and stuck in New York City as a teenage boy.

It's the first time he's been without his powers, and he has to survive in the modern world.

Which isn't an easy feat for a four-thousand-year old deity, especially one with as many enemies as he has.

The Kane Chronicles series:
The Red Pyramid
The Throne of Fire
The Serpent's Shadow

GOR008320912
The Hidden Oracle (The Trials of Apollo Book 1) by Rick Riordan
Rick Riordan
The Trials of Apollo
Used - Very Good
Paperback
Penguin Books Ltd
2017-05-01
400
0141363924
9780141363929
N/A
Book picture is for illustrative purposes only, actual binding, cover or edition may vary.
The book has been read but remains in clean condition. All pages are intact and the cover is intact. Some minor wear to the spine.