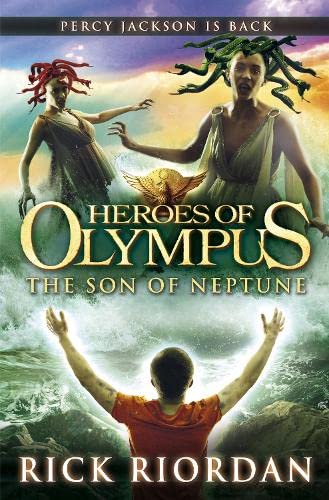 The Son of Neptune (Heroes of Olympus Book 2) Summary

The SECOND title in this number one, bestselling spin-off series from Percy Jackson creator, Rick Riordan.

In The Lost Hero, three demigods named Jason, Piper, and Leo made their first visit to Camp Half-Blood, where they inherited a blood-chilling quest:

Seven half-bloods shall answer the call,
To storm or fire the world must fall.
An oath to keep with a final breath,
And foes bear arms to the Doors of Death.

Who are the other four mentioned in the prophesy? The answer may lie in another camp thousands of miles away, where a new camper has shown up and appears to be the son of Neptune, god of the sea. . .

The Son of Neptune (Heroes of Olympus Book 2) Reviews

Storytelling that will get readers hooked -- Phillip Ardargh * The Guardian *

GOR004711711
The Son of Neptune (Heroes of Olympus Book 2) by Rick Riordan
Rick Riordan
Heroes of Olympus
Used - Very Good
Paperback
Unknown
0
0141335726
9780141335728
N/A
Book picture is for illustrative purposes only, actual binding, cover or edition may vary.
This is a used book - there is no escaping the fact it has been read by someone else and it will show signs of wear and previous use. Overall we expect it to be in very good condition, but if you are not entirely satisfied please get in touch with us.