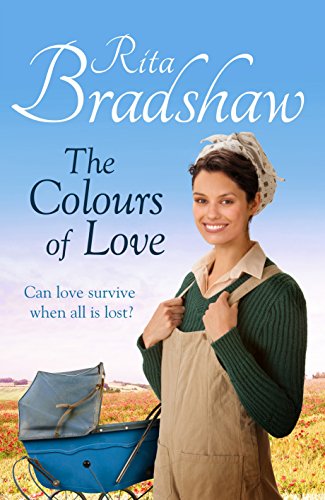 The Colours of Love by Rita Bradshaw

An emotional and poignant novel by the bestselling author of Dancing in the Moonlight, Rita Bradshaw.

The Colours of Love by Rita Bradshaw

Set in the tumultous times of World War II, The Colours of Love by Rita Bradshaw is a story of a capable and resourceful woman who proves that nothing is stronger than a mother's love.

Can love survive when all is lost?

England is at war, but nothing can dim land girl Esther Wynford's happiness at marrying the love of her life - fighter pilot Monty Grant. Their short honeymoon results in a baby, but on the birth of her daughter, Joy, Esther's world falls apart.

Esther's dying mother confesses to a dark secret that she has kept to herself for twenty years: Esther is not her natural daughter but the result of an exchange of babies after her own child was stillborn. Esther's real mother was being forced to give up her baby to an orphanage by her furious family who were incensed about the unsuitability of their daughter's lover, and Joy's birth makes the reason clear.

Harshly rejected by Monty, and with the man Esther believed was her father breathing fire and damnation, she takes her precious baby and leaves everything and everyone she's ever known, determined to fend for herself and her child. But her fight is just beginning . . .

Rita Bradshaw was born in Northamptonshire, where she lives today. At the age of sixteen she met her husband - whom she considers her soul mate - and they have two daughters and a son, and six grandchildren. To her delight, Rita's first novel was accepted for publication and she has gone on to write many more successful novels since, including the number-one bestseller Dancing in the Moonlight.

As a committed Christian and passionate animal lover her life is full, but she loves walking her dogs, reading, eating out and visiting the cinema and theatre, as well as being involved in her church and animal welfare.

GOR007743050
9781447271550
1447271556
The Colours of Love by Rita Bradshaw
Rita Bradshaw
Used - Very Good
Hardback
Pan Macmillan
2015-09-24
496
N/A
Book picture is for illustrative purposes only, actual binding, cover or edition may vary.
This is a used book - there is no escaping the fact it has been read by someone else and it will show signs of wear and previous use. Overall we expect it to be in very good condition, but if you are not entirely satisfied please get in touch with us
Trustpilot