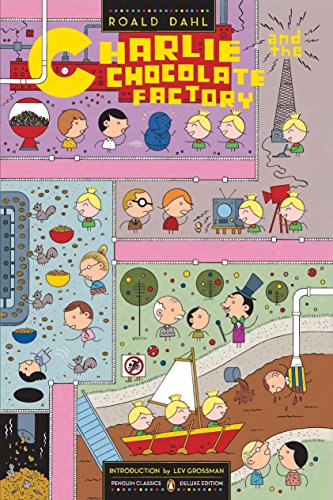 In Stock
£13.99
What happens when the five luckiest children in the entire world walk through the doors of Willy Wonka's famous, mysterious chocolate factory? What happens when, one by one, the children disobey Mr Wonka's orders?
Very Good
Only 1 left

What happens when the five luckiest children in the entire world walk through the doors of Willy Wonka?s famous, mysterious chocolate factory? What happens when, one by one, the children disobey Mr. Wonka?s orders? In Dahl?s most popular story, the nasty are punished and the good are deliciously, sumptuously rewarded.

A delectable new Deluxe edition of this wonderful classic.

Roald Dahl's parents were Norwegian, but he was born in Llandaff, Glamorgan, in 1916 and educated at Repton School. On the outbreak of the Second World War, he enlisted in the RAF at Nairobi. He was severely wounded after joining a fighter squadron in Libya, but later saw service as a fighter pilot in Greece and Syria. In 1942 he went to Washington as Assistant Air Attache, which was where he started to write, and was then transferred to Intelligence, ending the war as a wing commander. His first twelve stories, based on his wartime experiences, were originally published in leading American magazines and afterwards as a book, Over to You. Among his other publications are two volumes of autobiography, Boy and Going Solo, his much praised novel, My Uncle Oswald, and Roald Dahl's Book of Ghost Stories, of which he was editor. During the last year of his life he compiled a book of anecdotes and recipes with his wife, Felicity, which was published by Penguin in 1996 as Roald Dahl's Cookbook. He is one of the most successful and well known of all children's writers, and his books are read by children all over the world. These include James and the Giant Peach, Charlie and the Chocolate Factory, The Magic Finger, Charlie and the Great Glass Elevator, Fantastic Mr Fox, The Twits, The Witches, winner of the 1983 Whitbread Award, The BFG and Matilda. Roald Dahl died in November. For more information on Roald Dahl go to www. Roalddahl.com

Lev Grossman is ther book critic for TIME magazine and the bestselling author of the novels The Magicians and Codex. His new novel, The Magician King, will be published in the US in Autumn 2011.

Ivan Brunetti is an award-winning cartoonist who has illustrated covers for The New Yorker and edited two acclaimed anthologies of graphic fiction and cartoons. He teaches at Columbia College Chicago.

GOR007247731
Charlie and the Chocolate Factory (Penguin Classics Deluxe Edition) by Roald Dahl
Roald Dahl
Penguin Modern Classics
Used - Very Good
Paperback
Penguin Books Ltd
2011-09-29
176
0143106333
9780143106333
Winner of York Libraries Children's Book Awards: Story Books 2012
Book picture is for illustrative purposes only, actual binding, cover or edition may vary.
This is a used book - there is no escaping the fact it has been read by someone else and it will show signs of wear and previous use. Overall we expect it to be in very good condition, but if you are not entirely satisfied please get in touch with us.