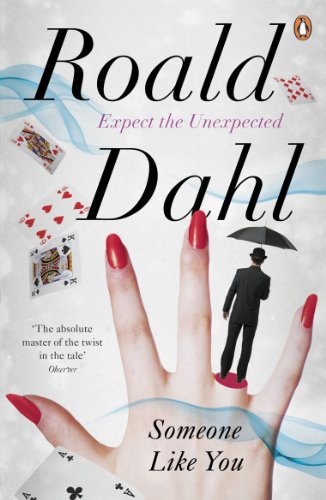 In Stock
£4.99
Offers a collection dark and sinister adult stories, in which, a wife serves a dish that baffles the police; a harmless bet suddenly becomes anything but; a curious machine reveals a horrifying truth about plants; and a man lies awake waiting to be bitten by the venomous snake asleep on his stomach.
Very Good Good
5 in stock

In Someone Like You are fifteen classic tales told by the grand master of the short story, Roald Dahl.

Here, in Roald Dahl's first collection of his world famous dark and sinister adult stories, a wife serves a dish that baffles the police; a harmless bet suddenly becomes anything but; a curious machine reveals a horrifying truth about plants; and a man lies awake waiting to be bitten by the venomous snake asleep on his stomach.

Through vendettas and desperate quests, bitter memories and sordid fantasies, Roald Dahl's stories portray the strange and unexpected, sending a shiver down the spine.

Roald Dahl, the brilliant and worldwide acclaimed author of Charlie and the Chocolate Factory, James and the Giant Peach, Matilda, and many more classics for children, also wrote scores of short stories for adults. These delightfully disturbing tales have often been filmed and were most recently the inspiration for the West End play, Roald Dahl's Twisted Tales by Jeremy Dyson. Roald Dahl's stories continue to make readers shiver today.

The absolute master of the twist in the tale * Observer *

Roald Dahl, the best-loved of children's writers, was born in 1916 in Wales of Norwegian parents. He was educated in England before starting work for the Shell Oil Company in Africa, and began writing after a 'monumental bash on the head' sustained as an RAF fighter pilot during the Second World War. He worked in a tiny hut in the apple orchard of his house in Buckinghamshire until his death in 1990 at the age of 74. Roald Dahl's many books continue to be read by children the world over who delight in the magic of his marvellous storytelling. His books continue to be bestsellers, despite his death in 1990, and total sales are 100 million worldwide!

GOR003614873
Someone Like You by Roald Dahl
Roald Dahl
Used - Very Good
Paperback
Penguin Books Ltd
2011-09-01
384
024195570X
9780241955703
N/A
Book picture is for illustrative purposes only, actual binding, cover or edition may vary.
This is a used book - there is no escaping the fact it has been read by someone else and it will show signs of wear and previous use. Overall we expect it to be in very good condition, but if you are not entirely satisfied please get in touch with us.