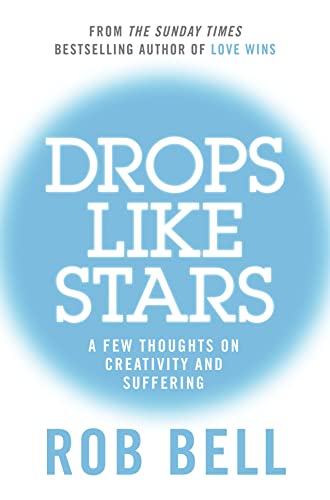 Rob Bell's extraordinary and provocative Drops Like Stars, published as part of the Rob Bell Classics relaunch, explores the relationship between suffering and creativity, and the transformative power of pain.

Drops Like Stars: A Few Thoughts on Creativity and Suffering by Rob Bell

Rob Bell's extraordinary and provocative Drops Like Stars, published as part of the Rob Bell Classics relaunch, explores the relationship between suffering and creativity, and the transformative power of pain.

`We plot. We plan. We assume things are going to go a certain way. And when they don't, we find ourselves in a new place - a place we haven't been before; a place we never would have imagined on our own. It is the difficult and the unexpected, and maybe even the tragic, that opens us up and frees us to see things in new ways.

`Many of the most significant moments in our lives come not because it all went right but because it all fell apart. Suffering does that. It hurts, but it also creates. This book is an exploration of the complex relationship between suffering and creativity, driven by the belief that there is art in the agony.' Rob Bell

`Few readers will dispute Bell's gentle assertions: that life can be extremely difficult and capricious, that it is often difficult to find God amid suffering, that suffering has a great potential to unify disparate people, and that great bursts of creative energy can arise from pain. Bell explores these issues not by covert biblical exegesis ... but [by] new-fashioned storytelling. Bell weaves inspiring stories of people who turned their suffering into something transformative.' (Publishers Weekly)

`Bell fights every impulse in our culture to domesticate Jesus [and] challenges the reader to be open to surprise, mystery and all of the unanswerables... Bell has given theologically suspicious Christians new courage to bet their life on Jesus Christ.' (Christian Century)

`Claiming that some versions of Jesus should be rejected, particularly those used to intimidate and inspire fear or hatred, Bell persuasively interprets the Bible as a message of love and redemption. . . . His style is characteristically concise and oral, his tone passionate and unabashedly positive.' (Publishers Weekly)

`One of the nation's rock-star-popular young pastors, Rob Bell, has stuck a pitchfork in how Christians talk about damnation.' (USA Today)

`It isn't easy to develop a biblical imagination that takes in the comprehensive and eternal work of Christ . . . Rob Bell goes a long way in helping us acquire just such an imagination-without a trace of soft sentimentality and without compromising an inch of evangelical conviction.' (Eugene H. Peterson, Professor Emeritus of Spiritual Theology, Regent College, and author of The Message and The Pastor

Rob Bell is the Founding Pastor of Mars Hill Holy Bible Church in Grand Rapids, Michigan. He is the author of the bestselling Velvet Elvis, Sex God, Jesus Wants to Save Christians, and Drops Like Stars, speaks to sold-out audiences across the world and pioneers a series of short films called NOOMA. He and his wife Kristen have three children.

GOR004715564
Drops Like Stars: A Few Thoughts on Creativity and Suffering by Rob Bell
Rob Bell
Used - Very Good
Paperback
HarperCollins Publishers
2012-08-02
144
0007487894
9780007487899
N/A
Book picture is for illustrative purposes only, actual binding, cover or edition may vary.
This is a used book - there is no escaping the fact it has been read by someone else and it will show signs of wear and previous use. Overall we expect it to be in very good condition, but if you are not entirely satisfied please get in touch with us.