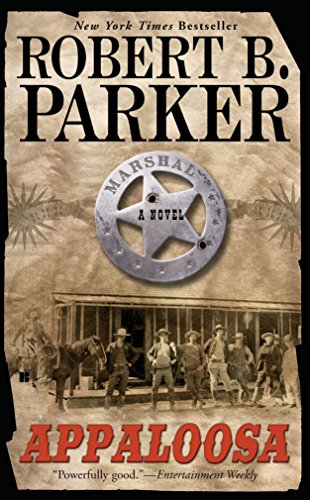 Appaloosa
by Robert B Parker

In Stock
£6.99
This "New York Times" bestseller is a richly imagined novel of the Old West that tells the tale of two gunmen who arrive in the lawless town of Appaloosa, where the actions of a renegade rancher have already taken their toll.
Very Good
Only 2 left

Appaloosa by Robert B Parker

When Virgil Cole and Everett Hitch arrive in Appaloosa, they find a town suffering at the hands of a renegade rancher who's already left the city marshal and one of his deputies dead. Cole and Hitch are used to cleaning up after scavengers, but this one raises the stakes by playing not with the rules--but with emotion.

Watch a QuickTime trailer for this book.

"Like the Spenser books, it's a study of Parker's enduring themes: buddy relationships, the weight that honor and responsibility put on a man, the consequences of violence, the way good can shade into bad and vice versa...a melancholy and sometimes moving tale of a lost but fascinating era."--The Seattle Times

"Dryly amusing...a conclusion that had to make Parker smile as much as his readers will."--Los Angles Times

"For...readers with a hankering for the Wild West, including a high-noon shootout and all the accoutrements."--USA Today

"Beneath the trappings of this gunfighter novel, Parker really has something to say about the nature of men and women in the Old West. Highly recommended."--Library Journal

"As always, [Parker] is a master...his plot gallops to a perfect, almost mythical ending. Like a great gunfighter, Parker makes it look easy."--St. Petersburg Times

"If Spenser and Hawk had been around when the West was wild, they'd have talked like Cole and Hitch. Wonderful stuff: notch 51 for Parker."--Kirkus Reviews

About Robert B Parker

Robert B. Parker was the author of more than fifty books. He died in January 2010.

GOR001390120
Appaloosa by Robert B Parker
Robert B Parker
Cole and Hitch Novel
Used - Very Good
Paperback
Unknown
0
0425204324
9780425204320
N/A
Book picture is for illustrative purposes only, actual binding, cover or edition may vary.
This is a used book - there is no escaping the fact it has been read by someone else and it will show signs of wear and previous use. Overall we expect it to be in very good condition, but if you are not entirely satisfied please get in touch with us.