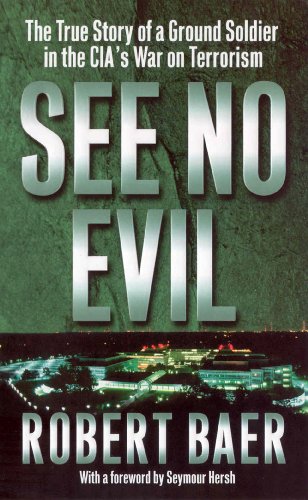 See No Evil
by Robert Baer

Out of Stock
See No Evil is the astonishing and controversial memoir from one of the CIA's top field officers of the past quarter century.
Very Good
Only 0 left

See No Evil by Robert Baer

See No Evil is the astonishing and controversial memoir from one of the CIA's top field officers of the past quarter century. Robert Baer recounts his career as a ground soldier in the CIA's war on terrorism, running agents in the back alleys of the Middle East, with blistering honesty. He paints a chilling picture of how terrorism works on the inside and provides compelling evidence about how Washington sabotaged the CIA's efforts to root out the world's deadliest terrorists. See No Evil is an unprecedented examination of the roots of modern terrorism and the CIA's failure to acknowledge and neutralise the growing fundamentalist threat, and an engrossing memoir of Baer's education as an intelligence operative. See No Evil includes revelations about the strategic alliance Osama bin Laden forged with Iran in 1996 to mastermind terrorist attacks on the United States and elsewhere, about the planned coup d'etat against Saddam Hussein and how it was aborted by the National Security Council, and about the CIA's disastrous decision in 1991 to shut down its operations in Afghanistan and Saudi Arabia, ignoring the fundamentalists working in those countries. An extraordinary testimony that has become even more vital and damning since the events of 9/11 and the subsequent War on Iraq.

"Revealing ... offers much eye-opening information. Baer has written a valuable, illuminating book" * Houston Chronicle *
"See No Evil is a real blockbuster, a revelation ... convincing and wonderfully presented ... [Baer] ties it all together like a suspense novel" * National Review *
"A particularly disturbing account...compelling" * Washington Times *

Robert Baer was a case officer in the Directorate of Operations for the Central Intelligence Agency from 1976 to 1997. He served in places such as Iraq, Dushanbe, Rabat, Beirut, Khartoum, and New Delhi, and received the Career Intelligence Medal in 1997. He now divides his time between Washington, D.C., and France. When Baer left the agency in 1997, he received the Career Intelligence Medal with a citation that says: "He repeatedly put himself in personal danger, working the hardest targets, in service to his country."

GOR001192866
See No Evil by Robert Baer
Robert Baer
Used - Very Good
Paperback
Cornerstone
2002-10-03
464
0099445549
9780099445548
N/A
Book picture is for illustrative purposes only, actual binding, cover or edition may vary.
This is a used book - there is no escaping the fact it has been read by someone else and it will show signs of wear and previous use. Overall we expect it to be in very good condition, but if you are not entirely satisfied please get in touch with us.